Today being the 70th birthday of one of the most iconic characters in entertainment history, it’s only appropriate to celebrate by watching some of the crazy rabbit’s best. For anyone interested, Bugs Bunny shorts run rampant on YouTube, including the best of them all–1957’s What’s Opera, Doc?

I’m also partial to Duck Amuck, from 1953; though it stars the ever-irascible Daffy Duck, Bugs plays an important part in the story …

Note that great “faux Peter Lorre” cameo and the first appearance of Gossamer, the hapless orange monster who always seems to be getting his hair or (in this case) his nails blown up by “beautician Bugs.”

And finally, one of my very favorites, 1947’s Slick Hare, features “cameos” by some of the biggest names in Hollywood at the time, most notably Humphrey Bogart and Lauren Bacall, as well as Carmen Miranda, Ray Milland, Frank Sinatra, and Sydney Greenstreet. Click on the picture below for a link to the video clip. 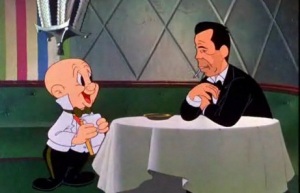 It’s a shame that these classic Warner Bros. shorts are not played on television very much anymore. I remember watching The Bugs Bunny and Tweety Show every Saturday morning when I was growing up, and the annual “June Bugs” event on Cartoon Network was a must-see. In November of last year, CN started playing an hour’s worth of Looney Tunes shorts every afternoon, but those disappeared from the network after only a couple of months on the air. Thankfully, most of the classic Looney Tunes shorts are available on DVD in five “Golden Collection” editions, each running around $30 on Amazon. And while that might seem steep, it’s well worth the investment to own the uncut, uncensored original cartoons.

In the meantime, we can only hope that Cartoon Network (or Boomerang!) will bring Bugs back to the airwaves soon!