Today it was pretty hard to choose which movie to recommend. So, let me start by saying just set your DVR up now and record the whole thing, call in sick, get popcorn, something.

That said, I’ll get to Spellbound. To fully understand how much I liked this movie, I have to explain my history with Hitchcock.  You see, I wasn’t a particular fan. I don’t like movies where things jump out suddenly. I don’t like to be scared. I did like Strangers on a Train pretty well, but that’s it. So, when Brandie told me I had to watch this movie I was not exactly enthusiastic. “But I really want to see your opinion/interpretation.” Okay, fine. So, after being assured that things were NOT going to jump out at me, I consented to watch this, at night, no less.

Well, one of the big selling points for me on this one, as you can probably guess, was Gregory Peck. Le sigh. We put this movie on, and I’m pretty enthusiastic about a female mental health practitioner getting it done in classic film. Then Gregory Peck shows up and its’ all over. That’s not the only reason I like this movie, although Brandie may tell you that it really is. Didn’t hurt, though.

“The head of the Green Manors mental asylum Dr. Murchison is retiring to be replaced by Dr. Edwardes, a famous psychiatrist. Edwardes arrives and is immediately attracted to the beautiful but cold Dr. Constance Petersen. However, it soon becomes apparent that Dr. Edwardes is in fact a paranoid amnesiac impostor. He goes on the run with Constance who tries to help his condition and solve the mystery of what happened to the real Dr. Edwardes.”

What I like about this one is the way it’s twisted. It’s not completely predictable, and only mildly out in left-field. When watching this, you must consider the time and psychological research that was popular. That said, is all the theory used in the film terribly practical/accurate/useful- not completely. But, in Hitchcock’s defense, I’ve seen much, much worse in current film and television.  That’s about all I can say without spoiling the ending. 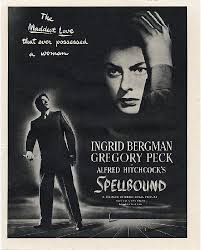 One of the best features, for me, was that Dr. Constance Petersen (Bergman) is an intelligent, strong heroine in the film. This is not the shrieking kind of situation one thinks of with the horror/thriller genre. Moreover, she is a competent, respected doctor. Having the female lead play a strong character, for me, greatly enhanced the movie. She is believable and as a viewer, I was able to like her and identify with her as a “real” person. So, extra cudos.

I recommend this one. It’s my favourite Hitchcock (yes, I’ve seen more since this one, but none I liked as much I enjoyed this one).

As an added bonus, if you see this film, I recommend watching Mel Brooks’ High Anxiety, which plays off of most of Hitchcock’s work, but quite a bit fits this particular film.

Closing out Bergman’s well-deserved SUtS tribute is the film which won her the first of her three Academy Awards, the prize for Best Actress.

In Gaslight, adapted from Patrick Hamilton’s play of the same name (though it was originally known as Angel Street),  Bergman plays Paula, an aspiring young opera singer. Her aunt Alice, a famed opera singer in her own right, had been murdered years previously, and Paula is haunted by her aunt’s death. She meets a charming, slick man named Gregory Anton (Charles Boyer) and falls head over heels in love; before long, the two are married, and Gregory insists that the couple move into the London townhouse left to Paula by her aunt. He also insists that, in an effort to start their lives together on a fresh slate, they pack up all of Alice’s belongings and store them in the sealed attic of the home. Soon after moving in, however, the isolated young bride begins to hear noises around the house, the gaslights throughout the home begin to flicker mysteriously for no discernible reason at all, and Paula begins to wonder if she’s going a little bit mad …

The showcase of this film is undoubtedly Bergman’s performance as the frightened, bewildered Paula. She swings between feelings of madness and coherence, joy and fear, almost seamlessly. Her always-luminous face reflects the haggard weight of her character’s many concerns, but Paula does not collapse under them; this young bride has a ribbon of steel in her spine, which we see come to full fruition in her final confrontation with her shady husband. That’s the brilliance of Bergman’s acting–she’s so subtle and layered, it takes multiple viewings sometimes to see everything she’s doing with a character. A sideways glance, a tilted eyebrow, the slight raise of her chin … she acts with her entire being. There have been only a handful to match her.

Bergman is aided in the film by a great supporting cast; Boyer is perfectly smarmy as the ne’er-do-well husband, and Joseph Cotten (one of my particular favorites) makes waves in a relatively small role as the detective who helps Paula figure out what’s happening in her home. And, somewhat notably, this film features the first-ever screen appearance of the lovely Angela Lansbury, in the not-so-pleasant role of the disdainful housemaid.

This is a great little noir-lite classic, suspenseful and entertaining, so make sure you catch it (or, if you’re not a night owl like me, record it!).

One thought on “SUtS: Ingrid Bergman”