There are a handful of movies I would personally label the funniest films of all time, and Bringing Up Baby would be near the top of that list. In fact, when I endeavor to introduce someone to the world of classic film, this is one of the first films I recommend viewing. It just sucks you in–in the very best way. And screwball comedy–of which this movie is one of the supremest examples–is always a great way to introduce a reluctant party into the world of classic cinema because … well, who doesn’t love to laugh?

Baby stars Katharine Hepburn as a dizzy heiress, Susan Vance, who falls head over heels in love with a hapless paleontologist, David Huxley (a sexily disheveled and bewildered Cary Grant). Through her machinations, David loses a very valuable bone–the “intercostal clavicle”–that belongs to the skeleton of a brontosaurus. Susan also inadvertently jeopardizes David’s attempts to secure a million dollars’ worth of funding for his museum. And to add to the craziness, Susan has recently received a rather intimidating gift–a large leopard named Baby–which she plans to take to her family’s farm in Connecticut, of all places. Add in a nosy aunt, a bumbling big-game hunter, a concerned psychiatrist, and an idiotic constable, and you can imagine the chaos that ensues.

Considering how hilarious and utterly charming this film is, it’s amazing to think today that this movie was once considered a notorious flop, even contributing to star Katharine Hepburn’s assignation as “box office poison” in the late 1930s. Hell, it’s difficult to think of a time when Kate Hepburn wasn’t considered a monumental success and a pinnacle of movie stardom. Her legendary career came complete with four Academy Awards for Best Actress–a feat unmatched by any other actress (or actor!) in the history of film–and a litany of iconic film roles opposite some of the biggest names to ever grace the screen. But once this film was completed, Hepburn, in the midst of a string of unsuccessful films, chose to buy out her RKO contract to avoid being cast in the low-budget drama Mother Carey’s Chickens (which had been assigned to Hepburn as a sort of studio punishment because of her poor box-office performance). She would spend the next two years on the stage until her triumphant return to the screen in 1940’s wildly popular The Philadelphia Story (also co-starring Grant; see Carrie’s rec below).

Hepburn and Grant made a total of four films together; in addition to Baby and Philadelphia, these included the delightful Holiday (1938) and the cross-dressing romantic comedy Sylvia Scarlett (1935). In each of their pairings, Hepburn and Grant are a wonder to behold–not only do they play off of one another very well, but their on-screen interactions demonstrate a true camaraderie and mutual respect that only heightens the chemistry between them.

And that chemistry was never more sparkling than it was in Baby. Grant, whose career began in vaudeville, takes a page from acrobatic silent screen legend Buster Keaton and throws his body around without reservation, all in pursuit of a laugh. And Hepburn is right there with him, shattering the normally reserved persona she had crafted in previous films and demonstrating a comedic timing that had heretofore only been hinted at in her career. Each brings out the best in the other, and neither was ever really able to capture that same effortless, effervescent magic with another co-star (though Hepburn came close with some of her later screen partnerships with Spencer Tracy, particularly 1949’s Adam’s Rib).

The film is not all about Hepburn and Grant, however; there are some great supporting performances, too. Charlie Ruggles is delightful as the befuddled Major Horace Applegate, who can’t understand why he’s hearing leopard calls in the middle of Connecticut. Walter Catlett, who plays the overzealous constable, Slocum, and May Robson, who plays Susan’s Aunt Elizabeth, are both sharply funny. And classic film fans might recognize the little terrier playing George, the dog who steals David’s bone: the same dog, Skippy, also played Asta in the Thin Man movies and almost stole the show in 1937’s The Awful Truth (also co-starring Grant).

It’s not hyperbole to say that Bringing Up Baby is one of the BEST DAMN FILMS ever made. If you have never had the opportunity to see this movie, this is your chance. You won’t stop laughing until the final credits roll.

I’m so excited- it’s Katharine Hepburn Day!!!!  Katharine Hepburn is one of my biggest heroines. She’s amazing, and I flat out adore her. The spunk. The attitude. The coolness. Her well-honed sneer and smooth sarcasm served her well in Hollywood, and especially in The Philadelphia Story.

I love this movie, and oddly, I love the remake High Society. It took me a while to decide which I preferred, and I’d like to take you through my debate very quickly. Actual debate took a number of years.

The Philadelphia Story has Katharine Hepburn playing a snide, wealthy young woman whose father has been discovered in a scandalous affair. To save face, her wedding (second marriage) is now open to the press, in particular a sleazy operation–with pictures. To make matters worse, her ex-husband is hanging around, “not” sabotaging the wedding. Father  believes he has done nothing wrong-no remorse–and Tracy (KH) wants to torture them all. Yes, cast KH, because, let’s face it, no one knows how to emotionally destroy with pitch-perfect style and class quite like her.  For this reason, she’s an awesome Tracy. Add to this that she’s starring … 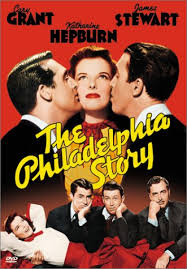 … between Cary Grant and James Stewart, and the  most casual reader of this blog needs no further comments on the matter. 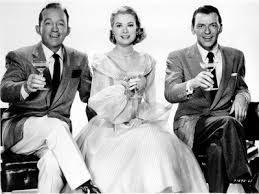 Later, High Society does well, but Tracy, played by Grace Kelly (also talented and lovely, no argument) is not quite as, say, conniving and snarky as KH. Tracy is a little softer in this version, which has the added musical charms of Bing Crosby (Dexter, the ex), Frank Sinatra (Mike, the reporter) and Louis Armstrong (as himself, added to the plot because, let’s face it–he’s Louis Armstrong, and why not?) Because that trio is a trio I also adore, points to High Society. I also prefer the little sister (two different names in the different movies–go figure) in High Society. She’s just hilarious, and possibly a bit of a stronger character. 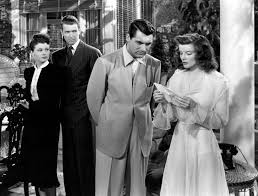 In the end (I guess a spoiler …), Tracy apologizes for her behavior and basically accepts a human fallibility. In High Society, she does this to her father, and while forgiving him and thus having a release would be acceptable, she actually capitulates and admits that she really is at fault and shouldn’t be angry that he humiliated the family by publicly cheating on Mother, even though he has never asked for forgiveness or admitted any wrong-doing. This bothers me. A lot. It always did bother me, but I pushed it aside.

Then I paid due attention to The Philadelphia Story. In this film, Tracy makes her admission to Dexter, who has actually done good things for her, and possibly was judged unfairly. He actually is there for Tracy and has some redeeming qualities, despite his imperfections. 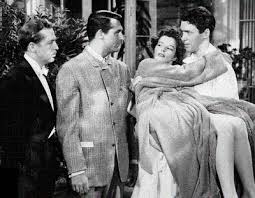 Now, we can play philosophy a little here, for those who have seen these films. Part of the theme is loving someone unconditionally, even if unworthy. That’s great. Perhaps Tracy apologizing to her father was to solidify that, showing Tracy’s growth. She made a mistake and is still lovable, and so it’s a two-way street–Dad is lovable, too. Now, I’m great with forgiveness–it’s healthy. But they still went a little far. Tracy falls only short of condoning his behavior; she blames herself for how she felt about it and that actually seeing a problem with his long-term cheating is wrong, all the while actually taking responsibility for her single indiscretion. It does tie their parallels together, but not in any kind of realistic, human, very believable, or particularly healthy way (IMHO).

So, with her apology to Dexter, who actually is redeemed throughout the movie and who actually does show her unconditional love (which her father fails to do), I have to give the best of the two to The Philadelphia Story. 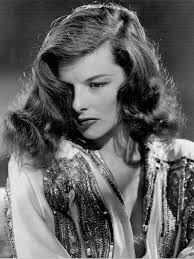 That said, definitely watch both. They’re fabulous.  And without question, make time for The Philadelphia Story. The lines are fabulous. The acting is fabulous. It’s a real winner and is Katharine Hepburn in a role written with her in mind–it simply can’t miss!