Though John Mills was an acclaimed actor in his own right, he is perhaps best known by modern audiences as the father of actresses Hayley (The Parent Trap) and Juliet (the over-the-top soap opera Passions). And while he was undoubtedly proud of his young thespians (he costarred with each of them at one point or another), it’s a shame that he is not better known on his own merits. Throughout a long and varied career, Mills played a series of memorable characters and worked with some of the biggest names in Hollywood.

The bulk of Mills’ work, however, was in his native Britain, and he excelled at playing stalwart young men in a series of dramatic roles. One such early, though relatively minor, role came in 1939’s Goodbye, Mr. Chips, one of the best films to come out of one of the most fruitful years in Hollywood history.

Chips, based on James Hilton’s novel, stars Robert Donat as the title character, a teacher named Charles Chipping. The story of his almost 60-year career is told in flashback, beginning with his arrival at the English boys’ school Brookfield as a brand-new Latin teacher. His initial kindly demeanor allows his rambunctious students to take advantage of him, and Chipping forces himself to become strict and unyielding, a persona he detests but finds necessary to maintain order in the classroom. On a holiday in Austria with the school’s German teacher (Paul Henreid), Chipping meets Kathy Ellis (Greer Garson in her star-making role) and they fall in love. Kathy, who nicknames her new husband “Chips,” encourages him to open up. When he returns to Brookfield with his bride, her love and encouragement allows him to blossom as a teacher and finally gain the admiration and respect of his beloved students and his fellow teachers, a change he maintains despite the tragedies that soon follow.

I first saw this film in high school and I fell ass-over-teakettle in love with it. Let me just warn you: if you’re a sap like me, you will cry. A lot. It’s impossible to watch this movie and not feel at least one little tear building up. The ending of this movie especially makes me bawl like nobody’s business. I think every teacher wants to feel as though they have made a difference in their students’ lives, and seeing the parade of students who call Chips a mentor and a friend is enough, by itself, to get the waterworks going.

The glue that holds this film together is Donat, who ages over the course of 60 years (from age 25 to 83) throughout the movie. He is simply magnificent as Chips. Not only does he handle the monumental task of convincingly aging on film (with the help of a killer mustache), but his utter sincerity shines through the performance. He nails the uncertain young teacher’s classroom demeanor, is remarkably genteel and self-questioning as Garson’s middle-aged courtier, and dodders about in his elderly age with a repressed eagerness that perfectly fits the character’s personality. Though I loved Clark Gable in his nominated performance as Rhett Butler in Gone With the Wind, I understand fully why Donat squeaked out the win for the Academy Award for Best Actor. It is the very definition of a career-defining performance (side note: Donat only completed twenty films in his rather abbreviated career before dying at the age of 53 due to chronic illness).

The supporting cast is just as strong; Garson, who received her first of seven Oscar nominations for this role, is wonderful as Kathy, and Henreid is memorable as Max, Chips’ only friend in his initial teaching years. Mills, as the adult Peter Colley, one of Chips’ former students, makes a mark in his small role. And Terry Kilburn, a very winning child actor who is perhaps best known as Tiny Tim in the 1938 Reginald Owen version of A Christmas Carol, shines in his multiple roles as several generations of the younger Colley children.

Don’t miss this excellent film. And make sure you’re stocked up on tissues before you sit down to watch it. 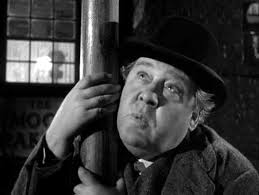 I have to confess: The reason this originally caught my eye was because of the name “Hobson,” which reminded me of the butler in Arthur (1981).  So, I recorded this one a while back and watched it–and I wasn’t disappointed. 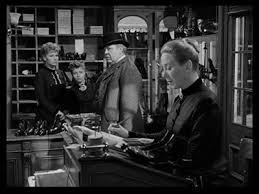 The plot of this film is a little different. Three daughters work and essentially manage their father’s bootshop.  Their father (Charles Laughton) spends all of his time in the nearby pub and demanding much of his daughters. After realizing how much a marriage settlement can cost, he declares that none of his daughters will ever marry. His eldest daughter (Maggie, played by Brenda De Banzie) and right-hand then decides to elope with his best boot-maker, Willie Mossop (John Mills). Her ambitions lead Willie to become not only a competitor in boot-making, but a superior competitor. Slowly, the new Mrs. Mossop gains enough leverage to overthrow her father and then set each of her sisters to marry their chosen suitors. 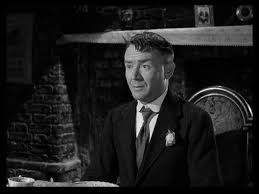 Don’t let the plot fool you–this is a comedy, even if it has pangs of the sad but true. John Mills does a brilliant job in portraying a talented, if slow and naive young man being led around by his new wife, who despite her rather diabolical plan, the audience cheers her successful coup. He also comes off as kind of adorably frightened out of his element (see photo above). Mills creates in Williee Mossop a very human comedic character who is very accessible and charming in his simplicity of mind. Charles Laughton leads with a great performance of a man who uses some odd logic to justify his preferred behavior and responsibility-free lifestyle–think Alfie Dolittle in My Fair Lady (complete with supportive posse at the pub) crossed with a respected businessman, and you basically have Hobson. It’s hard to really sympathize with his plight too much, because he is essentially thrust upon his own petard, as it were, and yet, it’s difficult to dislike him either. Sometimes it’s easy to believe that he is merely the product of bad advice and really not paying attention. So, watch and decide.

Far from a tear-jerker, Hobson’s Choice is an entertaining foray into dysfunctional family dynamics and those who survive–and sometimes improve–them.

One thought on “SUtS: John Mills”