So, we’re just going to go ahead and say the thing you’re not really supposed to admit out loud: Brandie and I aren’t exactly Clint Eastwood fans. Important? Yes. Iconic? Doubtless. But we really just can’t get into the films. Sorry, Mr. Eastwood. I congratulate you on your success, but the films don’t do much for me. I may watch a few of them, just for culture.

(Brandie: “That picture above, though, is kinda changing my mind. Maybe I can force myself to sit through a couple of those early Westerns …”) 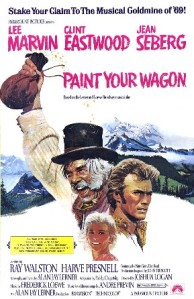 We picked Paint Your Wagon because the notion of Clint Eastwood doing this film is hilarious for anyone who has been around and paid any attention to film or popular culture ever. It’s a musical. It’s silly. I mean, Paint Your Wagon? It’s a long way from Dirty Harry. That’s funny. And I give Clint Eastwood props for versatility. I applaud you.

Plus, any time The Simpsons chooses to parody your film, it only makes us appreciate it more.

The other draw for me here (other than the fact that I enjoy musicals- why, yes, I am a geek) is Lee Marvin. I like Lee Marvin. I can’t see him without thinking of Cat Ballou, though. I haven’t reviewed Cat Ballou, but I’m sure I will before too long. For Lee Marvin fans, it’s the film where he finally got his more-than-deserved Oscar and dedicated the award to an intoxicated horse. (Yeah, you want to see it now, don’t you?)

So, I’ll probably DVR Paint Your Wagon, even though it doesn’t have an inebriated equine to speak of.