I’d like to look into Katherine Hepburn’s character Linda, in particular. Linda is the family black sheep, refusing to obey their “rules.” The family works to make more money, and that seems to be their primary goal. Linda wants a freer life and is more focused on  how you can use money to live a fun life instead of using money to beget more money. 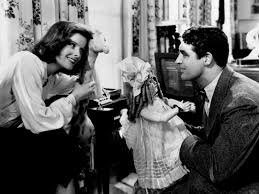 Linda spends a great deal of time in their old playroom, reminiscing and enjoying the toys, while she dreams about her mother, who was, according to Linda, a free-spirit. The playroom was her mother’s idea. She is greatly attracted to Johnny (Grant), because he represents the freedom in life and openness to experience that she has craved for years. She proclaims that he brings life into the house. 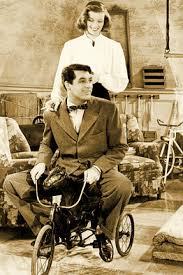 The time Linda spends in the playroom is pretty indicative of her character. On some level, she is an adult who simply won’t grow up. Because in her world, growing up or being an adult means working in a stifling job and focusing only on money. Fun has no place in adulthood, so she refuses to participate. She holds the fun for the family. By staying in the playroom, she can try to recapture those old feelings. Proponents of the “inner child” would say that Linda nurtures and encourages all of the inner children in the family, especially her own. It’s clear in that she wants her siblings to enjoy the playroom with her, wants to give her sister Julie and engagement party and marry Johnny and be happy, wants so much for the family members to actually enjoy themselves and participate in her world, much as a child would.

Johnny provides her that very outlet. He is very willing to participate in her inner childhood, and also has the ability and inclination to put both childhood and adulthood together in some sort of cohesion. So, when she goes with Johnny she may grow up and merge childhood and adulthood, because in his world, it is safe, acceptable, and possible to do just that.

One thought on “Therapy Thursday: Holiday”