During WWII, many of Disney’s animators were drafted, and eventually the studio itself was commandeered for the war effort, making it difficult to work on big features. Walt had snippets of various things that had been in different stages of production when the war broke out, so he decided to put them to together a la Fantasia to keep things afloat. He did a total of six “package” films. The first two, Saludo Amigos and The Three Cabelleros, Brandie talked about last week; so this week we’re going to talk about the next three: Make Mine Music, Fun and Fancy Free, and Melody Time.

While Fantasia was a collection of classical music selections, Make Mine Music is a mixture of jazz and popular music sung and performed by living legends such as Benny Goodman, Dinah Shore, and the Andrews Sisters. Originally there were 10 segments but one, “The Martins and the Coys” (based on the feud between the Hatfields and McCoys), has since been cut in later releases because Disney felt the violence inappropriate for children. If you had the Disney Channel back in the 80s and early 90s, you probably saw some of these clips (including the Martins and the Coys) shown between movies and other programming. Here are my favorites:

All the Cats Join In

This one is performed by legendary jazz musician Benny Goodman and his band. Basically it’s the story of a bunch of kids getting together at the malt shop, but the awesome thing about it is how they employ a technique where the pencil drawing the cartoon as it happens is a character too.

Casey at the Bat

This is one that I’ve always liked. Don’t really have a reason. It’s a musical recitation of the poem “Casey at the Bat” by Ernest Thayer.

Peter and the Wolf

Of all the segments I’m covering today, this is probably my all-time favorite. Based on the 1936 piece by Sergei Prokofiev, this animated version of the story of the little boy, Peter, who went out hunting a wolf is narrated by Sterling Holloway (a favorite voice actor for Disney). At the beginning, Holloway explains that the different instruments signify a different character, making this a wonderful segment for introducing children to the pieces of the orchestra. As you watch the piece, you can hear the different instruments working together as the characters interact, and you can start to pick out which part goes with which instrument.

The Whale Who Wanted to Sing At the Met

This piece is narrated and sung completely by Nelson Eddy, who tells the story of Willie the Whale, who wants to sing at the Met. I know, for me, some of the music in this was my first exposure to opera and is still how I initially think of those pieces when I hear the name. Besides I really love Willie’s version of Shortnin’ Bread. 🙂

Fun and Fancy Free is different from the other compilations I’m covering in that the segments featured are actually tied together by a frame featuring Jiminy Cricket. Jiminy opens the film singing the title song, “Fun and Fancy Free.” He then finds and plays a record of Dinah Shore telling/singing the musical story of Bongo the Circus Bear. After the Bongo segment, Jiminy finds an invitation to a party at Edgar Bergen’s house, so Jiminy decides to go see what’s going on. Edgar Bergen is best known to most people today as Candice Bergen’s dad, but in the 40s, he was a well-known ventriloquist and radio host. His two “friends,” Charlie McCarthy and Mortimer Snerd, were stars as well–particularly Charlie, who made it into several animated shorts. Jiminy arrives just as Bergen is getting ready to tell the story of Jack and the Beanstalk, or more appropriately, Mickey and the Beanstalk. The great thing about this section of the film is the switching back and forth between animation and live-action, and even the occasional overlapping like when Willie the Giant opens the roof to ask if anyone has seen a mouse, frightening Bergen. While this was only a year after Song of the South was released and the concept of the two mediums overlapping was still very new, it’s remarkable that the shots are as clean as they are given the technology of the day.

Bongo is based on a short story written by Sinclair Lewis (yup, the same guy who wrote The Jungle), about a circus bear who gets tired of living in captivity and runs away to live in the woods. Once he escapes the circus, he initially loves everything about being free, but after a really awful night and a bad morning, he’s about ready to pack it in when he sees Lulu-Belle. Lulu-Belle is definitely a flirt, making Bongo chase her until finally letting him catch up. Enter the big, mean Lumpjaw. He also has his eye on the lovely Lulu-Belle, and after a small misunderstanding about wild bear mating rituals, she accidentally slaps Lumpjaw, leading him to believe that she loves him. Apparently bears say “I love you” with a slap (because that’s the message we need to give small children). Once Bongo figures out his mistake, he rides in to the rescue, ultimately saves the day, and gets the girl. 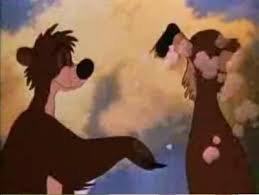 Mickey and the Beanstalk

We’re all pretty familiar with one version or another of this story so I’ll spare you the summary. This particular version features Mickey, Donald, and Goofy as our heroes, off on an adventure to meet the giant and save the Golden Harp. Willie the Giant is introduced for the first time and would make appearances later in other projects such as “Mickey’s Christmas Carol,” where he plays the Ghost of Christmas Present (and mirrors the end of this film with lifting of roofs and peeking in to find the Cratchits). This film also marked the last time that Walt Disney would lend his voice to Mickey Mouse, which he had been doing since first giving Mickey his voice in “Steamboat Willie.” While in the film version of this segment the narration was provided by Edgar Bergen, if you’ve ever seen the stand-alone version of this short, the narrator is Sterling Holloway.

Much like Make Mine Music and Fantasia, Melody Time is a collection of musical shorts strung together. But unlike either of those predecessors, Melody Time features a master of ceremonies, Buddy Clark, to do a little narration between shorts. This film features seven shorts including such timeless classics as Bumble Boogie, Johnny Appleseed, Little Toot, and Pecos Bill, all of which were seen years later on the Disney Channel. Like Fun and Fancy Free, this film uses some live-action/animation blending, particularly in “Blame it On the Samba,” which features Donald Duck, José Carioca, and the Aracuan Bird while organist Ethel Smith plays. Here are a couple of my favorites from this collection:

The Legend of Johnny Appleseed

This is the story of how John Chapman became known as Johnny Appleseed. It starts with Johnny minding his orchard and dreaming of going west like the pioneers, when an angel appears to him telling him that his mission is to go west and plant apple trees. And so he sets off with a bag of seeds, his Bible, and an old metal pot that also serves as his hat. He soon makes friends with the animals and for the next 40 years, he travels, planting apple trees until he passes away and his angel comes to take him to plant trees in heaven. This is based on the true story of John Chapman, who went all over Ohio, Indiana, and Illinois planting trees and spreading the gospel. This is a fun way to introduce the legend of Johnny Appleseed and one of several American Legends that Disney has animated over the years.

The last segment of the film is Disney’s version of the legend of Pecos Bil–as told by Roy Rogers and the Sons of the Pioneers to child actors Bobby Driscoll and Luana Patten (both were in Song of the South and So Dear to My Heart). The story details how Pecos came to be and is used to explain several things, including why coyotes howl at the moon, how the Painted Desert and the Rio Grande came to be, and why Texas is the Lone Star State. At the time the film was released, Roy Rogers and his horse Trigger were HUGE stars and were featured in countless films in the 30s and 40s. The segment features several songs including “Blue Shadows” and “Pecos Bill,” both of which are guaranteed to get stuck in your head. This clip has been heavily edited in recent years to remove all references to smoking (but somehow the parts about shooting out the stars were allowed to remain. Go figure). A popular favorite and one definitely to check out.

Brandie will be back next week to finish up our discussion of package films with a look at The Adventures of Ichabod and Mr. Toad as well as a post about Song of the South. After that we will move back into traditional animation with Cinderella.

One thought on “Don’t cross the bridge or peek around the corner until you’re there.”