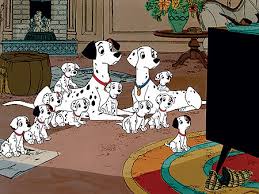 One of my favourite parts of the movie

I had to rewatch this one, even though it’s pretty iconic. I came to a number of realization watching it again. First, I adore Lucky. He’s funny in that small child, endearing way. Thus, we love him.

I won’t go into the plot description, because Cruella de Vil’s villainy is so famous, or infamous, that she’s used to represent  the crazy, evil woman community. I assume this is because there is something just so universally atrocious about someone willing to kill puppies–or have them killed–particularly 99 of them.

What I would like to comment on, though, is the structure. First I was struck by the credits. They are the picture of 1960s credit rolling, with the relevant but not story-lined animations that are just a little bizarre. They are also long. I don’t know at what point credit styles changed (I hope to do some research, or Brandie may already know the answer), but this is definitely when opening credits were long, elaborate, and more than the other Disney films I’ve watched lately, distinctly 1960s. 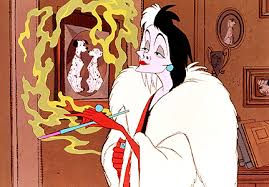 If she doesn't scare you, no evil thing will--she has curly, greenish smoke

Next to the structure of Cruella: one of Disney’s most recognizable and memorable villains. We all know she wants puppies for a soft, spotted fur coat. We know Anita went to school with her. But how does she know about the puppies at such exact times? Even before they are born, she’s ready for them. Odd. Creepy. Not very founded. What exactly made her so psycho? So evil? (Maybe she couldn’t help it, what with her name and all. Probably parenting, because any parents who would give that name to a child are likely to be anti-social at best. We can only guess). What does she actually do? These questions are answered nicely in the live-action version (which I will not review here), which could be a rare example of an improvement in a remake.  Given those potential problems, she’s wonderfully portrayed in voice and animation. I personally think that some of her qualities, such as the curling style of her cigarette smoke, quote Maleficent. Nice choice. 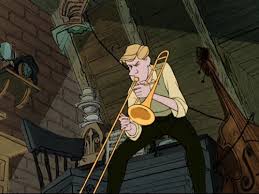 And Roger. He’s a songwriter, but not very talented. Not a problem. Cruella inspires him to the so-popular song “Cruella de Vil.” If you listen to the song alone, there’s not much to it, but that’s how catchy tunes work- and it is catchy. At the end, it’s popular in the film, playing on the radio. Apparently Cruella is too busy trying to find, kill, skin, and wear Dalmatian puppies to sue Roger for putting this song out that isn’t even a veiled attempt to insult her. He just destroys her name (i.e. tells the truth). This could be why it’s so popular. Maybe it’s the recent years that make us think “scandal!” so quickly.

The voice talent in this one is unusual. There are a few Disney staples (Nanny -Martha Wentworth voices Mad Madam Mim in Sword in the Stone, our next Disney review; and we see the voice of Colonel Haiti, J. Pat O’Malley, back as a Colonel again, as well as the voice of Jasper). Even more than the staples in this one, though, is television talent. Most of the voice talent had experience in television and continued in television after the film. Not unheard of, of course, but not always as typical for Disney, either.

Regardless, 101 Dalmatians has the right chemistry. It’s been charming audiences for going on 50 years now, and we expect it to keep going along with the rest of the Disney Masterpieces.