Few actors (at least in my mind) have ever been able to match the comedic physical prowess of the former Archibald Leach. When the athletic young Brit rechristened himself as the smooth, charming Cary Grant, he balanced his new romantic persona with a seemingly endless streak of youthful exuberance that shone through even the most serious of his roles. Though Grant is perhaps best remembered today as a debonair ladies’ man in a number of classic romances, some of his argunably best work emerged from the realm of screwball comedy. 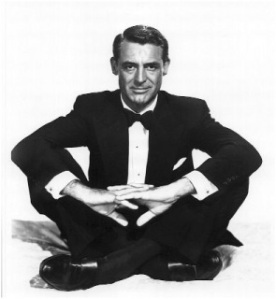 In a series of films throughout the 1930s and 40s, Grant displayed a skillful affinity for physical comedy that was honed on the vaudeville circuit in his younger days. At the age of fourteen, he began performing in various vaudevillian formats ranging from mime to stilt-walking, an itinerant way of life that would last for nine years. The lessons learned from vaudeville–the sense of comic timing, the willingness to make a fool of himself onscreen, the skillful pratfalling–would serve him well as he began to transform himself from mere “eye candy” supporting player into the self-assured leading man who would fuel a million fantasies (oh, come on, you know you’ve been there).

In many ways, Grant was one of the kings of the screwball comedy. Not only could he deliver the zaniest of lines with panache and good humor, but he seemed to relish the prospect of throwing his body about on-screen in hilarious–and sometimes painful–ways. Take, for instance, his acrobatics in 1938’s Holiday, in which Grant plays Johnny, a free-spirited young man who tends to express himself through tumbling stunts, including a fantastic handstand/backflip combo at the end of the film.

Yes, that is a blurry Grant, suspended in mid-air in a screen capture from the film. And yes, that is Katharine Hepburn, his Holiday co-star, approaching in the background–in the film, her appearance causes Grant’s character to lose focus and bellyflop flat on the ground.

Pratfalls aside, Grant knew how integral facial expression was to the overall effect of a screwball sensibility. 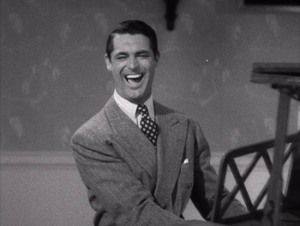 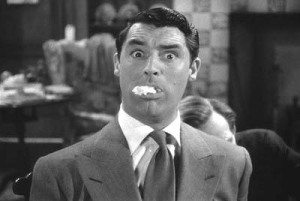 And Grant always played well with a partner, his most effective of which being Irene Dunne, in three films including The Awful Truth …

… and Katharine Hepburn, in four films including Bringing Up Baby …

… and his single on-screen pairing with Rosalind Russell, in 1940’s fast-talking His Girl Friday. 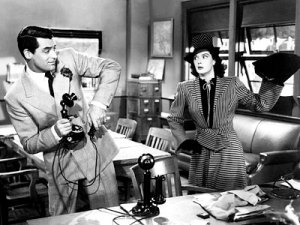 These films are just the tip of the oh-so-funny iceberg. There are several more films in Grant’s repertoire–among them Topper (1937), My Favorite Wife (1940), and The Bachelor and the Bobby-Soxer (1947)–that highlight the self-deprecating, antic humor that made the actor so appealing to a broad spectrum of moviegoers. Even his more serious roles, such as his four turns for director Alfred Hitchcock, emphasize the wittier side of his suave demeanor. Cary Grant was, in a word, just plain FUNNY.

So tell me–what are some of your favorite moments of Cary Grant hilarity? Any scenes (or entire films, for that matter) that are particularly rib-tickling or memorable for you?

P.S. If you’ve never seen it, one of the best tributes to Grant comes courtesy of TCM and the wonderful Tony Curtis, one of the actor’s self-proclaimed biggest fans.