A version of this post originally appeared as a part of our series of Summer Under the Stars recommendations in August 2010. It’s being reprinted here as part of the LAMB’s “Acting School 101” tribute to Elizabeth Taylor. 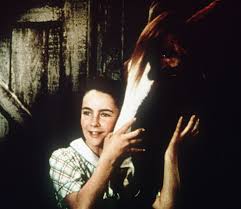 Growing up with horses, it’s probably a given that I should be a fan of National Velvet (1944), which is one of the many classic stories (based on the novel by the same name) about a girl and the horse she loves. Moreover, this film includes a great cast, also including Angela Lansbury and Mickey Rooney. Velvet (Taylor) lives with her family, who are hardly wealthy but not destitute. While her elder sister (played by a young Lansbury) is mooning over boys, Velvet moons over a particular horse who tends to break free from his pasture by jumping over the fence—effortlessly. Through a curious twist of fate and a lot of devotion to the horse, Velvet manages to get him for her own. She and Piebald could live happily ever after from there, but there’s more.

Because Pie is so talented, Velvet decides he should steeplechase (horse-racing crossed with jumping. Very exciting. Very fast. Very demanding. Very dangerous. Only performed by men. You get the idea) and that he could win. She encourages a traveling gambler and swindler (and former jockey), Mi Taylor, played by Rooney, to help her train Pie for racing. With more heart and determination than anything else, she manages to scrape together the entrance fee and gets Pie to the track.

Unfortunately, they are met with more challenges as their jockey turns out to be unacceptable, as he doesn’t believe in Pie the way that Velvet does. Never quitting, Velvet decides to ride, disguised as a young man. In the interest of avoiding spoilers, I won’t give away the ending, but suffice it to say that Velvet’s true-blue belief in The Pie is far from misguided.

Elizabeth Taylor is endearing as the dreamy-eyed, innocent, yet determined Velvet Brown. This is the role that would make her a star, and the young actress fought hard for the part. Taylor had been riding since she was a girl, so she does many of her own riding scenes, which adds to the authenticity of the film. It’s a great movie, a great family movie, and definitely a great choice for animal people and especially “horse people.” Velvet also displays the  big dreams that are often associated childhood, but combines them with hard work and undying determination, and Elizabeth Taylor gives Velvet a great human appeal.

If you’re looking for an entertaining film with a lot of heart, you can’t go wrong with Velvet.

One thought on ““Of course I’m going to win … I just arranged it with God.””