I may be breaking some rules here by not doing a particular film, but I like the general approach. More importantly, I couldn’t choose a movie to feature and haven’t had the time (sad …) to rewatch any of them, as I would want to do before posting. Instead, I decided to just talk about Lucille Ball, actress and comedienne extraordinaire.

Lucy has a great life story, but Lucy biographies have already been written. For a basic biography, Wikipedia has a decent one. Lucille Ball had a career that stretched from the 1930s and beyond, and for which she received lifetime recognition in the 70s and 80s. She’s acclaimed not only for her talent, but for her contributions to the advancement of women in multiple fields of entertainment: film, television, radio, and even behind the scenes. Lucy played many character roles, but also brought a fresh style of comedy to everything she did.

Most noted for her hilarious role in I Love Lucy, she brought acute comedic timing and undeniable commitment to her character. Her work not only echoed the great comic pieces, like those of Abbott and Costello, but also revolutionized the way comedy was portrayed. She could deliver a line with a straight man, with another gag runner, or on her own. Her work came from language (Vitameatavegamin), gags and slapstick humor (Lucy on the assembly line), and situation (purchasing an excessive amount of meat and then getting locked in the freezer storing it … and then hosting the “biggest BBQ in the world” when every bit of meat is later incinerated by accident). Her delivery sold it all. Not only was her timing spot on, but her expressions communicated everything. They showed a character with highly relatable emotions, moved the scene forward, and were as endearing as they were over the top.

At the time, it was uncommon for women to push forward comedy as aggressively as she did. Her comedy was about the audience, but also about herself. She wasn’t playing second fiddle to someone else, and she managed to carry the weight of the comedy she was creating. Lucy didn’t need to coin phrases to be recognized–her scenes themselves became icons. She set the standard for television comedy. It was easy to understand and enjoy for most anyone with its simple humor, but the comedy itself was complex. She didn’t have to rely on base humor–it was sheer elegance.

Still, Lucy was hardly relegated only to television, or even to comedy. She worked in a breadth of industries, paying her dues first as a model and extra, then later in numerous B movies. But even later in her career, after her phenomenal success in television, she still worked in other films and on Broadway. 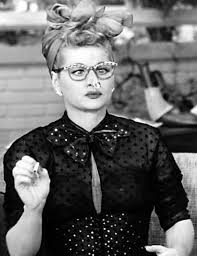 Why we love Lucy is really quite simple. She showed the comedy world what would work, but also who she was. Lucille Ball had the spark and commitment that marks the difference between talented and great. She brought all of herself to every performance, and that made each one undeniably Lucy.