I’m deviating a little from our usual, and hopefully Nikki and Brandie will just let me get away with it. I’m getting ready to go to Dragon Con (anyone else going? Anyone? Anyone? … Okay, then), so if it isn’t an Anne McCaffrey book or Joss Whedon, I haven’t been participating in anything recently. I’ve got to be prepared, you know. 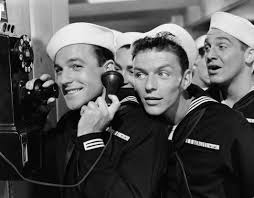 However, on my drive to my big-girl job that helps to keep me from posting regularly (read: hardly ever), I decided that Frank Sinatra was in order. I just love him (see other posts on musicals such as High Society for further Sinatra worship). It got me to thinking: some of that is making a comeback. While it was once a little old-fashioned for someone my age to like Sinatra, Bing Crosby, Louis Armstrong, Peggy Lee (need I go on?) as much as I do, their musing is returning in the “current” market. Yes, the crooners are back. Am I pleased? Fairly. No, we haven’t gotten Old Blue Eyes back, and I doubt we ever will, but it’s increasing in vogue. Women again swoon, but this time it’s over the voices of men like John Mayer, who play a lot of acoustic melody and original pieces. However, the tones of these new pieces are true descendants of the jazz standards. Today’s crooners are also remaking the original pieces made famous in the lounges and films of a long-lost era (Michael Buble, the resident champion). Who can blame them? Perhaps we can begin to thank American Idol for this, as they are fans of recreating existing songs. The move is becoming popular (Glee, the multiple new renditions of “Over the Rainbow,” etc.). We like bringing the past back. Looks like classic film fans are not the only ones who miss it. 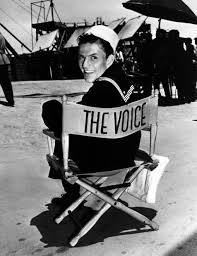 This is too awesome.

In film, however, we are not reverting back so much. Instead, we move ever forward into graphics, action, and of course, the 3D revolution. Don’t get me wrong, I enjoy these as well, but in a completely different way from the classics. More importantly, though, we continue to comment that “they just don’t make actors/actresses like that anymore.” We said it during the Lucy Blogathon. We’ve said it about Cary Grant, Gregory Peck, Katharine Hepburn, etc. It’s the truth–they just don’t. In today’s film industry, would they have a place?

(1940) The Philadelphia Story, or Too Much Awesome for One Film.

I’d like to think they would, that that much talent just can’t be shut out. That’s what I tell myself. There is some evidence: Hugh Laurie, Alan Rickman, Kathy Bates–all brilliant. It’s a different kind of brilliance, but brilliant nonetheless. Johnny Depp is quite the current heartthrob, and, let’s face it–he can act. Is he William Holden? Not so much.

(Sense and Sensibility, 1995) Alan Rickman and Hugh Laurie in one room--in a film with Emma Thompson. Jane Austen really CAN put a lot of awesome in one room.

Music is moving back to the swing era a little. Fashion is going all over the place. Will the film industry follow? What I do know is that if Cary Grant or Gregory Peck are ever reincarnated, I will be an obsessive movie-goer.

But I'm pretty sure we'll never see this again ... Gregory Peck as Atticus Finch (To Kill a Mockingbird, 1962).