We may have vowed not to host another blogathon for at least another year, but that doesn’t mean we won’t be participating in what other folks have to offer. If our growing “to do” list is any indication, there will be no dearth of inspiring, interesting topics from which to choose over the next couple of months …

First up, CMBA (the Classic Movie Blog Association) is hosting its third (and final) blogathon of the year, the Guilty Pleasures Blogathon, sometime in September (the date has not yet been set). All members of CMBA are welcome to submit a post for this event. Our contribution will be a post on one of Carrie’s and my favorite (very) minor musicals, 1946’s Cinderella Jones. Why do we consider this one a guilty pleasure? You’ll have to wait until September to find out. Suffice it to say, however, that the phrase “soap sandwich” plays a role in why we’re somewhat embarrassed to admit our adoration for this odd little movie. 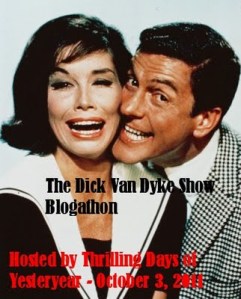 Soon after, we will be jumping on board Ivan’s 50th anniversary celebration of the premiere of The Dick Van Dyke Show over at the venerable Thrilling Days of Yesteryear. I’ve already called dibs on one of my favorite episodes, “It May Look Like a Walnut” (from season two), an episode that creeped me out as a kid. “Walnut” is a hilarious spoof of Invasion of the Body Snatchers (1956), so I will be preceding my entry with a review of that film and will then tie the two together in my subsequent Van Dyke posting.

In addition to these two, we’ve already mentioned that we intend to participate in the Fashion in Film and Carole-tennial(+3) blogathons at The Hollywood Revue and Carole & Co., respectively. Looks like September and October will be filled with some fun writing and some entertaining reading!

And though not technically a blogathon, we will also be throwing our hat into the ring on behalf of Wonders in the Dark and their countdown of the 70 Greatest Movie Musicals of All Time. I’ll be contributing two pieces to the countdown–you’ll have to wait and see what they are! This is an event you won’t want to miss. Some great bloggers (and True Classics faves) are participating in the countdown, including The Movie Projector’s R.D. Finch, John Greco of Twenty Four Frames, The Scarlett Olive’s Hillary, and Marilyn Ferdinand of Ferdy on Films, among others.

A couple of other quick notes of interest:

Over at the True Classics Facebook page, we are highlighting some of our favorite fellow classic film bloggers. Each week, we choose one “Awesome Classic Blogger” and direct you to their Facebook page and blog. So far we’ve recognized TC blog buddies Caroline at Garbo Laughs and Clara at Via Margutta 51. Head on over to Facebook and “like” our page for more information!

The Classic Film & TV Cafe is currently running a series of “3-on-3” panels in which they ask a trio of bloggers three questions on a single subject related to classic film. I was honored to be asked to contribute to the first panel, a discussion of Disney animated films. Go check out the Cafe for more 3-on-3 posts throughout the month of August!

Finally, a post that I wrote last year on the Ginger Rogers-Ray Milland comedy The Major and the Minor (directed by Billy Wilder) was recently reprinted at MovieFanFare! You can find the article here.