A fresh-faced young beauty sporting a killer sense of comedic timing from an early age, Diana Lynn was a fixture in some of the funniest comedies of the 1940s and 50s. Lynn was born Dolores “Dolly” Loehr, but like so many of her contemporaries, the actress’ name was changed when she became a contract player for Paramount. She began her career in music, playing the piano with the Los Angeles Junior Symphony Orchestra, which precipitated her appearance in 1939’s They Shall Have Music with Joel McCrea. She appeared in an uncredited part as one of the child musicians in the movie, and again appeared as a musician in the similarly-themed 1941 picture There’s Magic in Music. 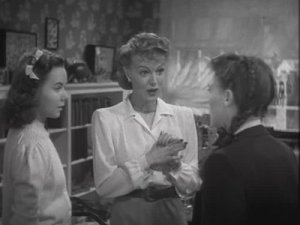 Lynn’s first acting role was in 1942 in The Major and the Minor, playing Lucy Hill, the precocious sister of Rita Johnson’s bitchy blonde. Lynn couldn’t have asked for a better acting debut–her costars were Ginger Rogers and Ray Milland, and the film was the first to be directed by famed screenwriter Billy Wilder. The young actress certainly makes her mark–the smart-assed, wise-beyond-her-years budding scientist is one of the highlights of this utterly delightful comedy. As the only one who sees through Rogers’ charade (making her instantly smarter and more perceptive than every adult in the room), Lynn deftly portrays Lucy’s youthful cynicism with an irresistible sparkle. 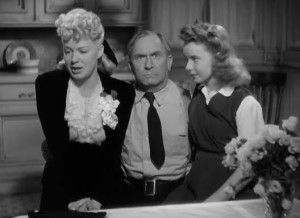 In 1944, Lynn appeared in a film for another great writer/director, Preston Sturges. In The Miracle of Morgan’s Creek, Lynn plays Emmy Kockenlocker, the wiseacre younger sister of Betty Hutton’s Trudy. When Trudy wakes up after a night of partying with a bevy of soldiers, she finds herself married and pregnant–though she cannot remember her husband’s name. The rather racy subject matter somehow slipped through the Production Code, and the movie was the most popular film of the year. Another notable supporting role came in 1948, when Lynn costarred with the soon-to-be-married Cary Grant and Betsy Drake in Every Girl Should Be Married (which marked Drake’s film debut). Lynn plays Julie, best friend to Drake’s Annabel, and helps her determined pal snag Dr. Grant for herself–whether he wants her or not.

Lynn may be best remembered for the three films she made with the comedy team of Dean Martin and Jerry Lewis. In My Friend Irma (1949) and My Friend Irma Goes West (1950), Lynn plays the ditzy Irma’s (Marie Wilson) exasperated roommate, Jane, who winds up falling in love with Martin’s character, Steve. The films are based on the popular radio show (which also starred Wilson), and though Martin and Lewis play supporting roles in the first film, their popularity ended up convincing the folks at Paramount to exponentially increase their roles in the sequel. Five years later, Lynn reunited with the now-influential comedy duo for You’re Never Too Young. This movie marked a kind of “full circle” moment for Lynn–it was based on the film that introduced her to audiences, The Major and the Minor. In this version, Lewis takes on the Ginger Rogers role, with Lynn as the Ray Milland-type figure who believes Lewis to be a young boy in need of help (Martin again plays Lynn’s love interest in the film).

You’re Never Too Young was one of Lynn’s last big-screen performances. She made one more film in 1955–The Kentuckian, with Burt Lancaster–and, at the age of 30, retired from films. She moved to television at that point and guest-starred on several notable series and anthology shows, even starring as Tracy Lord in a 1959 television version of The Philadelphia Story (alongside Mary Astor, Gig Young, and Christopher Plummer). In 1965, she left Hollywood altogether, but reappeared onscreen in a small role in 1970’s Company of Killers with Van Johnson and–once again–Ray Milland. A year later, Lynn was offered the role of Helene, the wife of closeted homosexual B.Z. (Anthony Perkins) in Play It As It Lays (1972), but she sadly passed away in December 1971 after suffering a stroke. She was only 45 years old.

Diana Lynn’s film career was relatively short–only lasting fifteen years and 30 movies–but with her wit, charm, and ever-exuding warmth, the actress was certainly a welcome screen presence in each and every film she undertook.