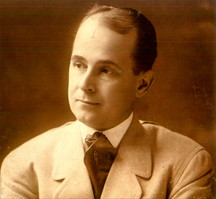 Like many early figures in the slowly-emerging field of animated film, Winsor McCay initially developed his artistic talent as a comic strip artist and vaudevillian. Born in Canada and educated in the United States, McCay got his start in entertainment doing “chalk talks” on the vaudeville circuit. Much like J. Stuart Blackton, a groundbreaking figure in early animation in his own right, McCay drew figures on a chalkboard and altered them during his performance. His act, “The Seven Ages of Man,” depicted the gradual aging of two sketched faces, and was not wholly dissimilar from Blackton’s own “Humorous Phases of Funny Faces” (which is considered by many scholars to be the first truly “animated” short film).

But even before he gained fame on the vaudeville circuit alongside such notable names as Harry Houdini and W.C. Fields, McCay had already established himself as a skilled writer and illustrator of comic strips. In 1903, McCay created his first strip while working for the Cincinnati Enquirer, called A Tale of the Jungle Imps by Felix Fiddle. It ran for forty-three weeks that year, and by the time the final installment was published in November, McCay had accepted a job at the New York Herald as a staff cartoonist.

While at the Herald, McCay created a number of strips, of which two became his most successful: Dream of the Rarebit Fiend (which ran from 1904 through 1911) and Little Nemo in Slumberland (which ran from 1905 through 1914). The former was a more adult comic strip–and was actually published in the Herald-owned Evening Telegram–and depicted a series of characters whose love for rich foods like the titular Welsh rarebit right before bedtime caused an unending series of nightmares.

While Rarebit Fiend was more popular among readers, Little Nemo would ultimately be the most groundbreaking strip McCay ever produced. Depicting the dream adventures of an imaginative young boy, Nemo was boldly drawn in a surrealistic style befitting the dreamlike subject matter. The strips are beautifully detailed, and though they take up a full newspaper page, no space is wasted, and the narrative flows smoothly from panel to panel. The Nemo strips are sometimes crazy and bizarre, but always entertaining and wonderfully inventive. Nemo was published by the Herald until 1911; that year, in a bid for more creative and personal freedom, McCay jumped to William Randolph Hearst’s New York American, where the strip continued (under the name In the Land of Wonderful Dreams so as to avoid legal entanglements with the Herald) until 1914. 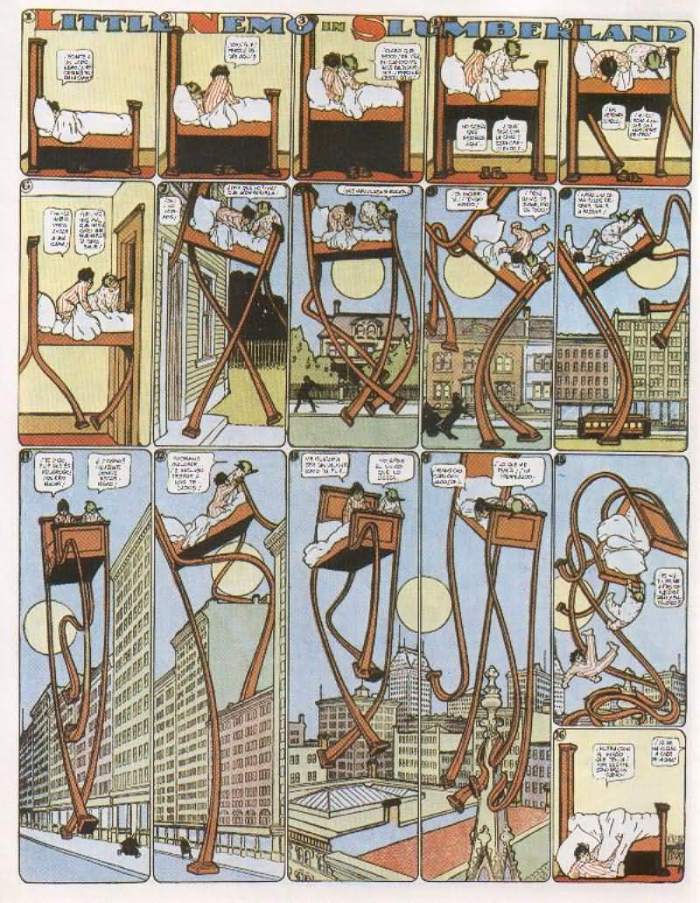 In 1911, Blackton and McCay teamed up to produce a short film based on Little Nemo, titled Winsor McCay: The Famous Cartoonist of the N.Y. Herald and His Moving Comics (nowadays, it’s generally just referred to as Little Nemo). The film depicts McCay revealing his intentions to animate his comic strip to his “artist friends,” who then ridicule him for the notion. The short takes us through the process of creating and filming the animated segment from conception to completion. And in the end, we’re treated to one of the earliest examples of the future riches that animation would shower upon the world.

[If you’re the impatient type, in the clip posted below, the animated segment begins around 7:25 and pops into color around 8:12.]

What is most impressive about Nemo is that the animation portion was almost entirely done by McCay alone. He personally drew over 4000 individual ink-and-paper drawings, crafting and timing the “animated” movements by stopwatch. The only thing McCay did not do by himself was the coloring of the frames; the cartoonist hired an outside artist to tint every single frame by hand.

There’s no narrative quality to the Nemo animation, and the surrealistic nature of the Nemo comic strips translates well into animated form. The short is a series of vignettes, an exhibition of character movement and humor as Nemo takes two of the strip’s supporting characters, Flip and The Imp, through a series of comical paces. Nemo then sketches the figure of the Princess (daughter of King Morpheus of Slumberland), who comes to “life” and rides away with Nemo on a throne inside the mouth of a dragon. The entire segment is delightful and whimsical, though its abbreviated running time only serves to whet the audience’s appetite for more.

McCay delivered “more” in 1914 with the creation of the short film Gertie the Dinosaur. Gertie is considered by many scholars to be the first instance of an animated character showing true elements of individualized personality. Gertie is, by turns, playful, mischievous, recalcitrant, repentant, and utterly adorable (the way she scratches her head with her tail is endearingly cute). As in Nemo, there’s no real sense of narration. McCay appears briefly at the beginning of the film to introduce Gertie before stepping off-screen and running the dinosaur through a series of tricks via title cards. The animator then reappears at the end, closing the cartoon by taking a ride on “Gertie’s” back.

The creation of Gertie was just as painstaking as the earlier process with Nemo. McCay ultimately sketched nearly 10,000 drawings of Gertie, and he hired another artist to sketch all of the backgrounds, which were unusually finely detailed. The drawings were done on rice paper, which was then mounted to cardboard for the process of animating the sequences. McCay crafted a revolutionary method for ensuring a smooth transition between different frames, the precursor to “keyframe” animation (which allowed for relatively seamless movement in traditionally hand-drawn animated features).

McCay would go on to make several more animated short features, including one depicting (in a documentary-type form) the 1915 sinking of the Lusitania. But his animated output was ultimately limited at the demand of his employer. McCay came to regret his move from the Herald to the American. He reluctantly turned his focus back to drawing editorial cartoons at the behest of Hearst, but his heart was not in the work. Hearst, for his part, exerted his influence to try to prevent theater owners from booking McCay’s showings of animated films like Gertie–he felt that the artist’s “childish” cartooning work detracted from the more important business of crafting political cartoons, particularly during the height of World War I. As a result, in 1924, McCay declined renewing his contract with Hearst and returned to the Herald, where he restarted the Little Nemo strip, but it only lasted for a couple of years.

In his later years, McCay grew resentful of what he viewed as the commercialization of animation. In 1927, when a group of young animators decided to host a dinner in his honor, McCay delivered a speech in which he stated, “Animation should be an art, that is how I conceived it … but as I see what you fellows have done with it is making it into a trade … not an art, but a trade.” McCay died in 1934, and his work was nearly forgotten for more than a decade until 1947, when his films were discovered in storage and properly restored and preserved for posterity.

Still, despite his misgivings about the future direction of the animated feature, Winsor McCay’s legacy as the venerable “Father of Animation” (a title he sometimes shares with Blackton, depending upon the historian telling the tale) lives on. The annual Annie Awards, which celebrate the year’s best achievements in the field of animation, named its lifetime achievement award after McCay. Over the years, that prize has been awarded to some of the biggest names in modern animation, most of whom (one could argue) were directly influenced by McCay’s work: Tex Avery, Chuck Jones, Mel Blanc, Ub Iwerks, Bob Clampett, Mary Blair, Hayao Miyazaki, Don Bluth, John Lasseter, Tim Burton, Brad Bird, Matt Groening, and Walt Disney, among many more. In 1994, Gertie was voted the sixth greatest cartoon of all time in a peer-reviewed survey of 1000 professionals in the field; it was the oldest cartoon to appear on the list. McCay’s comic strip work is still highly influential, and vestiges of the Nemo style can still be seen in the Sunday morning funny pages.

Bill Waterson, the creator of my favorite comic strip of all time, Calvin and Hobbes (still miss it!), was particularly influenced by Nemo. The beautifully-crafted half-page Sunday Calvin strips, particularly from the latter half of the comic’s run, are reminiscent of McCay’s glorious full-page Nemo adventures.

Without McCay’s talent and belief in the still-new medium of animated film, who knows how the history of animation would ultimately have been written? Winsor McCay’s importance in the development of animation as both art and entertainment is undeniable. With the help of an overly precocious young boy and an adorably obedient pen-and-ink dinosaur, one man set the stage for animation’s evolution from parlor trick to beloved cinematic and artistic medium.