By 1930, Mickey Mouse had become a bona fide animated star. Since his creation two years earlier at the hands of Walt Disney and Ub Iwerks, he had starred in almost two dozen black-and-white shorts, ranging from his ever-popular debut in Steamboat Willie to Mickey’s Follies (1929), which introduced “Minnie’s Yoo Hoo,” the song that would remain Mickey’s theme for several years. These early cartoons became immensely popular, but after a few years, Disney’s writers and animators began having trouble crafting new, interesting material for the company’s flagship character. It didn’t help that the character of Mickey had begun to evolve (likely at Walt’s behest) from a sly schemer (a la his predecessor, Oswald the Lucky Rabbit) into a paragon of “good” behavior (albeit with some killer dance moves).

The development of a strong supporting cast of characters solved this problem, as figures such as the temperamental Donald Duck, the appropriately-named Goofy, and the rascally chipmunks Chip ‘n’ Dale allowed the animators to indulge in more varied storylines, with new gags that were sometimes silly, sometimes mean-spirited. Donald could be the bully, Goofy could do the crazy stunts, and Chip ‘n’ Dale could provide the mischievousness that Mickey’s sometimes bland portrayal lacked.

But those characters didn’t emerge until later (Goofy in 1932, Donald in 1934, the chipmunks in 1943). The earliest supporting characters in the Mickey shorts–figures such as Clarabelle Cow and Horace Horsecollar–would not prove to be as lasting a presence in the Mickey cartoons throughout the years. Though Mickey’s recurring early nemesis, Pete (who had originally debuted as a villain in the “Alice Comedies” and the Oswald shorts), would remain a go-to “bad guy” figure over the years, Clarabelle and Horace–and their barnyard friends–were not nearly as popular. By the late 1930s, the pair only appeared in a handful of shorts, and by the mid-1940s, they were essentially forgotten.

But in 1930, one of Mickey’s most popular and longest-lasting supporting characters was introduced, when he was given what every young, anthropomorphized mouse needs: a canine companion.

Pluto (or, as he was initially known, Pluto the Pup) didn’t start out as Mickey’s dog, however. In his first appearance, in 1930’s The Picnic, he was actually Minnie’s dog, and his name was Rover. But even before that cartoon, a precursor of Pluto popped up in The Chain Gang, which was released a month before The Picnic in 1930. In that short, Mickey escapes from jail and Pete is sent after him, trailing a pair of vaguely familiar-looking bloodhounds. 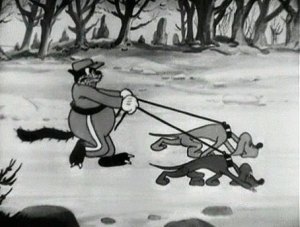 The design of these dogs was adapted and refined for The Picnic. In the cartoon, Minnie insists on bringing her “little Rover” along on the trip, and in a scene that likely enrages PETA advocates everywhere, Mickey ties the dog to the back of the car before driving off and dragging him behind. But when Pluto spots a pair of dancing (and honking) rabbits, the dog ends up dragging the car–and the hapless Mickey and Minnie–behind himself as he sets out on the chase.

Pluto debuted as Mickey’s companion almost seven months later, in the 1931 short The Moose Hunt. It is in this cartoon in which the character is first referred to as “Pluto.” The origins of the character’s name, however, have long been in dispute. More than a year earlier, in 1930, the current-dwarf-planet-formerly-known-as-a-“planet”-planet Pluto was discovered. It has long been believed that Disney subsequently named the dog after the planet (as opposed to the original source of the name–the Roman god of the underworld), but Disney never officially indicated why the name was ultimately given to the character. Still, it can’t be a coincidence that the name “Pluto” was in the news quite a bit while the dog was being created …

Over the years, Pluto has arguably become the most lovable Disney creation. And in many ways, this is due to his non-anthropomorphized nature. Unlike most of the other animal characters in the Disney universe, Pluto does not walk upright, nor does he speak, though he does occasionally snicker in addition to typical canine communication such as whining, barking, and growling. His movements and behavior are that of a dog–an uncommonly versatile dog, true, but a pet nonetheless.

In many ways, Pluto hearkens back to Winsor McCay’s Gertie the Dinosaur, the seminal animated short that inspired a generation of artists including Walt Disney himself. Gertie’s appeal as an animated creature that could communicate through sheer will of personality alone is revisited in Pluto’s antics. But Pluto also has the benefits of an overly expressive face, which can convey everything from joy to anger to utter befuddlement. Who needs words when the entire audience can tell what a character’s thinking with one quizzical glance or bared grimace?

This reliance on physicality is exemplified in Playful Pluto (1934), which is Pluto’s first significant role in a cartoon. It’s not the best Pluto cartoon–in essence, it’s little more than a series of funny vignettes in which Pluto’s titular playfulness interrupts Mickey’s attempts to get some work done around the house. But the scene that steals the show–and ultimately makes this cartoon an important one in the annals of animation–is a carefully-crafted sequence in which the dog has an uncomfortably close encounter with a sticky flystrip.

This scene has become famous over the years, and with good reason. Animated by Norm Ferguson, who had worked on developing the character from its earliest days, the “flypaper sequence” has been lauded by animators and historians for its realistic depiction of a “thinking” character. According to storied Disney animators Frank Thomas and Ollie Johnston, authors of The Illusion of Life (considered the veritable bible of animation by many in the field), this single minute-long scene was a groundbreaking moment in the development of animated characters whose thoughts could be telegraphed solely through their movements on the screen, as opposed to relying on dialogue to express their feelings.

“Throughout the sequence, Pluto’s state of mind is always visible, in his expressive face and body. The gags are well-constructed–everything that happens to Pluto seems possible, in a physical sense, with none of the gags forced–but it is the trajectory of the dog’s emotions that makes this sequence so vivid.”

Indeed, Pluto’s reactions to his predicament flow naturally from one impediment to the next. You can almost see the wheels turning in Pluto’s mind as he tries to extricate himself from the flypaper, his emotional responses running the gamut from startled to confused to determined to angry to purely frustrated. In an era when cartoon characters relied on witty dialogue and music to get their full intentions across to the audience, Pluto’s bout with the flypaper is truly a marvel.

Over the years, Pluto starred in a number of shorts, some with Mickey, some with Minnie,  and some on his own. He’s been paired with Donald Duck and Chip ‘n’ Dale in several cartoons. He has a particularly antagonistic relationship with the last two, as evidenced by shorts such as 1943’s Private Pluto (the chipmunks’ first appearance), the Oscar-nominated Squatters’ Rights (1947), and 1952’s Pluto’s Christmas Tree (which has always been one of my particular favorites).

And any time Mickey welcomed another pet into the house, Pluto had something to say (bark?) about it, whether it be Figaro, the mischievous cat from the 1940 film Pinocchio (see Pluto’s Sweater, 1949) or a fun-loving seal, as in the Academy Award-nominated cartoon posted above, 1948’s Mickey and the Seal.

In the early 1950s, Disney ceased production on Pluto-starring cartoons while continuing to produce toons featuring other characters such as the ever-popular Donald. But the lovable pooch is still a welcome presence in Disney shows and other modern media, including the early-2000s series House of Mouse, the current computer-animated Disney Junior series Mickey Mouse Clubhouse, and the Kingdom Hearts video games. Still, for me, his appeal will always lie in those early cartoons, because Pluto’s two-decade run of shorts produced some seriously hilarious and aww-inducing bits of animated genius.

Some more fun facts about the precocious pup:

This post is our (long-winded) contribution to the Classic Movie Dogathon hosted by the Classic Film & TV Cafe. Make sure to check out the other wonderful entries that will posted between now and Wednesday, February 22nd!