On Thursday night, Carrie and Nikki and I (along with our friend Brindha) converged in Atlanta for the TCM Road to Hollywood screening of Seven Brides for Seven Brothers (1954). Nikki arrived first and, despite the packed-to-the-gills house, was able to secure us seats in the third row on the right side of the stage. And it turned out that we had excellent seats, as host Robert Osborne emerged from the back of the auditorium and walked down the aisle, pausing in front of us for a moment before taking the stage. 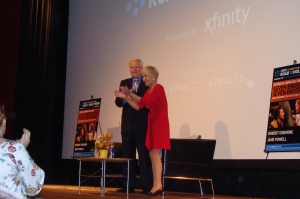 A few minutes later, the film’s star, Jane Powell, skipped down the aisle, charming the entire audience with her vivacity and spirit. At 82 years young, Powell is still just as beautiful as in her Hollywood heyday, with a set of gams that instantly invoke envy (as she told us later, she owes her lithe figure to Pilates and walking the streets of New York City!). 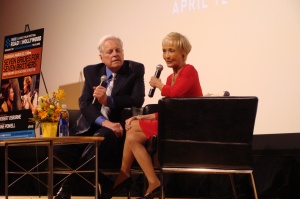 After a short discussion, Osborne and Powell took questions from the audience, and then we settled in to watch the film. Granted, it wasn’t the best print of the film–the color was off in parts, and in several sections, the film actually skipped a few seconds. But overall, it was wonderful to see this musical staged on the big screen, where it belongs. And the audience really got into the movie, laughing uproariously and sometimes singing along to the songs or quoting favorite lines out loud. It made for a really interesting communal movie-watching experience–a rare thing these days, indeed. 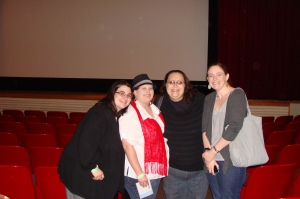 The TC crew: Nikki, Carrie, and Brandie, with Jill

After the show, we were able to meet Jill (also known as “kittenbiscuits“), the talented blogger behind Sittin’ on a Backyard Fence and the new classic film site The Cinementals, where you can read Jill’s reflections on the Seven Brides experience.

Overall, it was a wonderful experience, and well worth the trip! Thanks to TCM for scheduling the Road to Hollywood series for those of us who cannot make the trip to the annual TCM Classic Film Festival in Hollywood in April. It brings a little bit of the glamour and excitement our way, and for that, we classic film fans can only be grateful.

12 thoughts on “A classic time in Atlanta.”