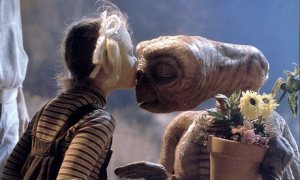 My earliest movie memory isn’t of going to a movie theater, but of watching a movie at home. One night when I was about three years old, my mom and dad decided to rent a movie and order pizza for dinner and the movie they decided to rent was E.T. (1982). I remember asking my mom about the movie and she told me that I would like it. Boy, was she ever right! From then on, I was obsessed with E.T. I think a big part of its appeal to me, especially at that age, was the wonder of watching this alien creature. I remember liking Return of the Jedi (1983), particularly the scenes at Jabba’s Palace, for that same reason. Eventually, my dad decided it would be easier to just buy a copy of E.T. rather than to keep renting it because I wanted to watch it constantly. So one night he bought a tape of E.T. and while I was sleeping, he set it on the dresser next to my bed. When I woke up, the first thing I saw was that tape and I was ecstatic! I’ve lost count of how many times I’ve seen that movie, but it’s still my favorite movie of all time.

As for how I got interested in classic films, I can’t remember ever not having some degree of awareness of them. Both of my parents like classic movies, so I remember watching things like Some Like it Hot (1959) and Arsenic and Old Lace (1944) when I was a kid because those are things my mom would watch. Casablanca (1942) is a big favorite of theirs. I don’t even remember the first time I saw Casablanca; it’s just one of those things I feel like has always been there to me. I also watched a lot of TV shows that were very film referential, like I Love Lucy, The Simpsons, The Critic, even Muppet Babies, and that’s how I learned about a lot of classic movies and movie stars.

Once I got a bit older, I started gravitating more towards older movies out of my own interest. I went out to the movies with my friends all the time when I was in high school, but they always wanted to see the worst movies and I was craving something different. Movies with excessive CGI or Ben Stiller weren’t my style, but Niagara (1953) and Dr. Strangelove (1964) were. The big turning point for me was when I was in college and TCM was added to my dorm’s cable line-up. When we got that, I started watching TCM pretty often. One Saturday morning, I just happened to catch The Great Dictator (1940), and that was it for me. All of a sudden, I was fascinated with Chaplin and wanted to see some of his silent films. Before I knew it, I was a full-fledged classic film addict.

Angela Petteys, 27, lives in Detroit, MI. She graduated from Ferris State University with a degree in Television and Digital Media Production. Angela blogs about classic film at The Hollywood Revue and is a contributing writer to The Cinementals.

6 thoughts on “The growth of a classic film fan.”