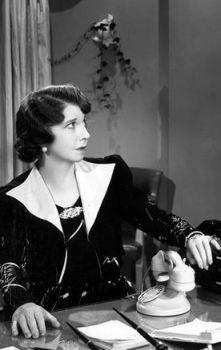 Her name may not be well-known to modern audiences, but her face is immediately recognizable to classic film fans. Throughout the 1930s and 40s, actress Helen Broderick appeared as the wisecracking pal of numerous Hollywood stars, always bringing a shot of well-timed droll humor to every role. In many ways, Broderick was the prototype for the sarcastic female sidekick, a persona that would later be filled (and taken to new, snarky heights) by such memorable character actresses as Eve Arden and Thelma Ritter. Her career in films amounted to a little more than two dozen pictures over the course of two decades, and even in the smallest of parts, Broderick was a welcome comedic presence.

Broderick had grown up determined to avoid show business due to a stage-obsessed mother, but when she left home at the age of fourteen, she found there was no better way to support herself than to reluctantly embrace the field she loathed. Broderick kicked off her career as a chorus girl on Broadway, appearing in the first Ziegfeld Follies in 1907 when she was barely sixteen years old. As one of the glamorous Ziegfeld Girls, Broderick shared the stage with some of the most notable performers of the day, including Will Rogers, Sophie Tucker, W.C. Fields, and Ed Wynn, among many others. Soon she moved on to the dramatic stage, understudying to popular Broadway star Ina Claire. When Broderick was forced to stand in for Claire one evening, her deliberately hilarious mangling of the play Jumping Jupiter made her a star. She went on to appear in a number of shows, most notably the Cole Porter-scored musical Fifty Million Frenchmen, which debuted in 1929.

Though Broderick had appeared in a handful of short films while living in New York, it was the big-screen adaptation of Frenchmen that ultimately brought her to Hollywood in 1931. In the movie, she reprises her role as Violet, a naughty American tourist. The film was not a strict adaptation of the stage show–the musical numbers were removed from the film before its release, as the public had reportedly grown weary of the genre by that time. The movie itself is relatively unremarkable, though The New York Times singled out Broderick positively in an otherwise lackluster review of the picture.

Broderick’s most notable roles may have been in the two films she made opposite Ginger Rogers and Fred Astaire–and they just happen to be two of the dancing pair’s very best. In 1935’s Top Hat, Broderick appears as Madge Hardwick, exasperated wife of Edward Everett Horton’s Horace. Madge is good friends with Rogers’ Dale Tremont, who in a case of mistaken identity believes that Astaire’s character, Jerry–the man with whom she has fallen in love–is actually Horace. Broderick is hilarious as Madge, particularly when needling hapless husband Horton (when Jerry realizes that Dale has rejected his proposal because she believes he is married to her friend, Madge wryly replies, “Well, no wonder she said he was interesting”).

The following year, Broderick again partnered with Astaire and Rogers (as well as the subject of our last “Who’s That Girl?” profile, Betty Furness) in Swing Time. This go-round, Broderick plays Mabel, Rogers’ tart-tongued friend and confidant who gets caught up in the complicated romance between the two leads, as Lucky (Astaire) tries to hide his engagement to Margaret (Furness) from new love Penny (Rogers). Broderick gets some of the best zingers in the film–though most of them tend to reference her supposedly decrepit age (she was barely in her mid-40s at the time)–and she has a great rapport with costar Victor Moore, who plays Lucky’s older pal Pop.

Throughout the decade following her appearance in Swing Time, Broderick was featured in supporting roles opposite some of the biggest names in Hollywood: Barbara Stanwyck, Constance Bennett, Ann Sheridan, Dick Powell, Fred MacMurray, Adolphe Menjou, and Gloria Swanson among them. The actress also appeared in leading roles in several B-movies during that time as well, though she never broke through to mainstream leading-lady success. She eventually retired from the screen after completing the 1946 film Because of Him, in which she appeared opposite Deanna Durbin and Franchot Tone.

Though Helen Broderick may not be well-remembered today for her own career, she has a very special connection to a noteworthy Oscar-winning star. While still a teenager, she married fellow actor and vaudevillian Lester Crawford (who would go to appear with her both on Broadway and onscreen in Frenchmen), and in 1911, she gave birth to their son, Broderick Crawford (pictured to the right). And in 1949, Broderick won the Academy Award for Best Actor for his searing portrayal of Willie Stark in the film adaptation of All the King’s Men.

Helen Broderick passed away in 1959 at the age of sixty-eight. Though she had not wanted a career in entertainment, it found her nonetheless–and quite thankfully, for all of us who enjoy revisiting her films to witness anew her smart-mouthed charm.