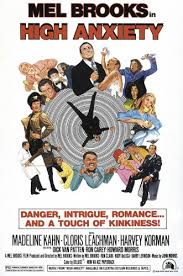 I have to begin by saying how excited I was to hear about the “Best Hitchcock Films Hitchcock Never Made” blogathon. Several months ago, I decided to run a series on Mel Brooks, and this is the best kickoff I could have chosen. My many thanks to Dorian and Becky for hosting the “Not-Hitch” celebration!

High Anxiety (1977) was designed to parody suspense film as a genre, but primarily to parody Hitchcock suspense films. Many may recognize the references to Vertigo (1958), which are certainly prevalent, but Brooks wouldn’t be the brilliant filmmaker we know if he had stopped there. 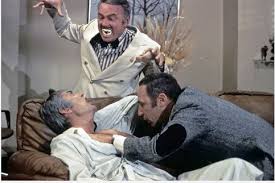 The standard asylum fear: staff trapping patients by convincing others they are crazy. Here, Dr. Montague pretends to become a werewolf.

The setting screams Spellbound (1945), as does the opening premise: Dr. Thorndyke takes over the Psycho-Neurotic Institute for the Very, Very Nervous, a position that the villainous Dr. Montague had expected to receive. The film that ensues is a mishmash of numerous Hitchcock images including imperatives from Psycho (1960), North by Northwest (1959), The Birds (1963), Spellbound, Suspicion‘s (1941) spider web shadow, The Man Who Knew Too Much (1954), and Vertigo (please note: NOT an exhaustive list).  In proper Mel Brooks fashion, the more you know about Hitchcock’s work, the more humor you can find in the film. 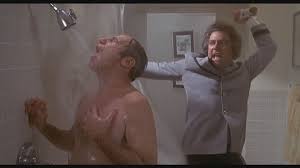 Possibly the most obligatory parody in the film: Dr. Thorndyke about to be “stabbed” by a newspaper.

Most of Mel Brooks’ parodies mimic images. What makes this film extra-special, however, is the way he plays with what made Hitchcock such a famous filmmaker: camera angles. Hitchcock is widely considered a filming genius and credited with revolutionizing the use of the camera to create visual effects. Mel Brooks pays close attention to this, and mimics Hitch’s habit. The introduction runs through the airport, following a baggage claim. This preferred pattern would eventually become a favorite of modern film artist Tim Burton.  Later, the film showcases using camera angles by literally placing the camera in random places or, as in my favorite scene, actually creates a mood using the camera angle.

The gate to the institute: Please note the sign “keep in.”

One of my favorite scenes in the film involves Dr. Montague and Nurse Diesel, portrayed by two frequent Mel Brooks compatriots: Harvey Korman and the incredible Cloris Leachman. Nurse Diesel (yes, that’s Nurse Ratched from 1975’s One Flew Over the Cuckoo’s Nest, and not even subtle), the true evil mastermind, explains the plot to Dr. Montague during an afternoon tea. The camera, however, sits below the glass-topped coffee table. The camera allows the audience to “spy” on the plotters, who unwittingly block the camera repeatedly as they go about having their tea. The comedy of the moment is brilliant, drawing the audience into the role of spy, albeit a spy constantly frustrated by carafes and saucers (and eventually completely blocked by a tray). Brooks creates one of his best parodies here by comedically accomplishing the very thing that makes Hitchcock so masterful: using perspective to create or change the role of his audience.

“Vertigo” and the blonde bombshell …

What also makes this film special is that Mel Brooks stars in the movie himself. Like Hitchcock, he typically has a character role or cameo in his films. Oddly, in his film pertaining to Hitchcock, he steps out and stars in his own picture. It is not the first or certainly the only movie where he does so, but it is his first with a speaking role (he stars also in 1976’s Silent Movie). However, in proper Hitchcock fashion, Mel Brooks hired a “blonde” to play the lead hysterical female role–Madeline Kahn. The in-the-film-blonde Kahn takes her role quite seriously, basically encompassing every suspense/Hitchcock bombshell all in one character (and let’s face it, no one in Mel Brooks’ arsenal, or possibly in the world, can do pitchy hysteria quite the way she can.). 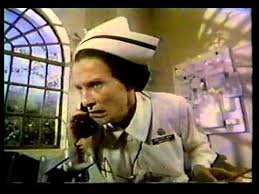 The acting in this film is excellent overall, and no suspense is worth anything unless the villain in compelling. Harvey Korman is excellent as the rather disturbed puppet front man. Cloris Leachman’s performance as the horrifying Nurse Diesel is nothing short of a statement. Her verbal cues and posture communicate everything about her commanding strictness, and she creates a delightfully bizarre, blocked speech by clenching her teeth and only talking out of one side of her mouth. Just as Hitchcock worked hard to give the audience important signals of impending danger, she’s a caricature of held-back, hidden villainy.

This post could probably continue forever with parody mentions, pointing our references, or discussing the brilliance of the performances, but there has to be at least a little suspense left for the film …