The movie poster, though I can’t say I like the imagery or the color …

McLintock! (1963) is my favorite John Wayne movie. Not being a big fan of Westerns in general, this hardly may be great praise, but perhaps it is. It is on my short list of “westerns worth watching.” I love the humor, the banter, and the playfulness of this movie.

My grandmother loved Westerns, and she loved John Wayne. She would have been ninety years old this past July, and that is a big part of why I volunteered to do this piece. 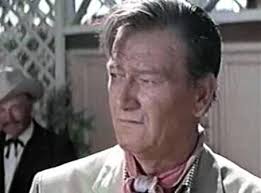 John Wayne made a career out of being the cowboy, the “man’s man” on the silver screen–and why not? He was huge. He’s impressive on screen and was fairly impressive in person. (There is a statue of him in Madame Tussaud’s in London–or at least there was several years ago–and you can see for yourself.) He was also known not to be shy about his opinions, which pretty  much reflects his on-screen characters. McLintock! was indeed a comedy, but also an expression of his own conservative views. 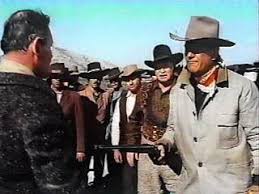 He was responsible for naming the Governor (Robert Lowery) Cuthbert H. Humphrey after his own political thorn, Senator Humphrey.  The anti-feminism within the plot feels forgivable, probably due to the film’s unabashed childishness–spankings, fighting in mud, resisting decorum. More than anything, we watch John Wayne act like a very large, intoxicated child. His escapades are so well-known that the local children race to catch his hat in the morning (which he has thrown to the weather vane atop the roof in his drunken return home). To make matters more interesting, Maureen O’Hara plays opposite him as his estranged wife Katherine, all the while informing him he should act like a grown man, instead of an ape. If anyone could play this role, it was Maureen O’Hara. 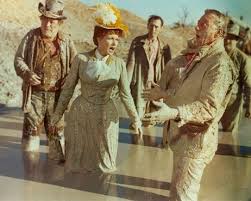 Even Maureen O’Hara’s in the mud.

In McLintock!, Wayne reunites with O’Hara once more (in the fourth of their five films together), with appearances by Patrick Wayne, Stefanie Powers, Chill Wills (Best. Name. Ever.), and a goofball performance by Jerry Van Dyke. The only really sentimental part goes to character actor Jack Kruschen as Mr. Birnbaum. They made a good choice in casting him; he made short roles go far in film and television throughout his career (it appears broadcast television had to reconfigure itself to do without him after his retirement in the late nineties, as he was in countless major series for more than forty years).

What I love about this film is that it’s quotable, such as during the famous mud scene when the Chief declares, “Great party, but no whiskey. We go home.”  He’s a great character, rather Sondheim in nature, with his random appearances regarding whiskey. Then it flips and they are crucial to the development of the plot, or subplot, depending on which plot you consider primary. Regardless, he’s an excellent addition to the film and helps set the unique tone for this Western piece.

My favorite piece of John Wayne timing is the fight with Maureen O’Hara. After said fight, in which she refuses to have a discussion with “an intoxicated man” and storms up the stairs, he follows her, stating, “And I am not intoxicated. Yet.”  This scene sums up the film and their relationship in a few lines of spot-on timing. 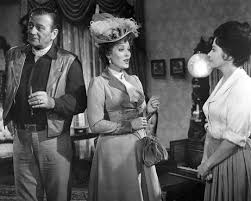 This film is fun and lighthearted. It’s the type of film that makes you think they had fun making it, or at least hope they did. As I enjoy assigning accompanying foods to movie-watching, I particularly recommend partnering McLintock! with biscuits, in deference to Mrs. Warren’s cooking prowess, and perhaps a fried chicken dinner with mashed potatoes.

This post is an entry in the “2012 TCM Summer Under the Stars” Blogathon sponsored by Jill of Sittin’ on a Backyard Fence and Michael of ScribeHard on Film. Make sure to check in with Jill and Michael throughout the month for more entries from around the blogosphere!

7 thoughts on “John Wayne is … McLintock!”