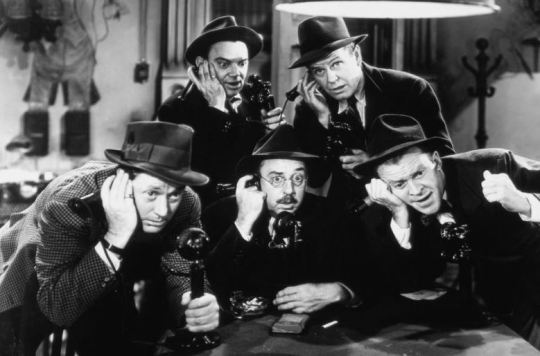 There’s a brilliant bit of dialogue in the middle of Howard Hawks’ 1940 screwball masterpiece His Girl Friday that succinctly sums up the film’s derisive views on the profession of journalism. [At this point, I should probably go ahead and warn you that this post will be chock-full of spoilers.] A group of reporters have gathered in the press room of the courthouse the night before the hanging of a man named Earl Williams, accused of shooting a cop in cold blood. The reporters, seemingly less interested in discovering the truth behind the case than in sensationalizing the story by any means possible, are approached by the sheriff, who hands them tickets to the execution. “Why can’t you hang this guy at five o’clock instead of seven?” one of the reporters complains. “It won’t hurt you, and we can make the city edition.”

This rather cold-blooded remark is only one of several uttered by the reporters depicted throughout the movie, who prove that they are willing to do whatever it takes to scoop the competition. That “anything in the name of the story” credo is echoed in the opening title of the movie, a tongue-in-cheek statement that sets up the film to come as a kind of urban fairy tale, with a knowing wink to viewers who know all too well the truth behind the farce. 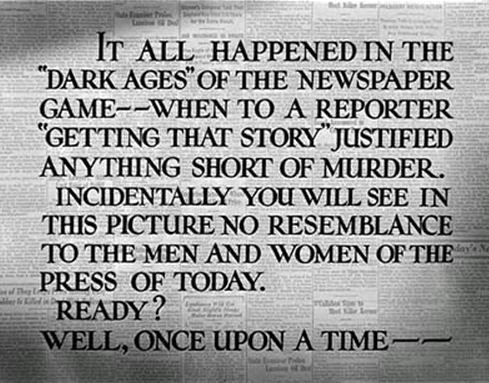 His Girl Friday centers around the futile attempts of reporter Hildy (Rosalind Russell) to escape the life of a newshound “wage slave” for a more sedate and “respectable” existence in suburbia with bland insurance salesman Bruce Baldwin (Ralph Bellamy, who undeniably excelled at playing such white-bread characters). The problem is, Hildy’s former boss, Morning Post editor Walter Burns (Cary Grant)–who also happens to be her ex-husband–is unwilling to let her go, and does everything he can short of committing murder to convince her to stay in his life, both professionally and personally.

His Girl Friday was adapted from the 1928 Broadway smash The Front Page, conceived by two former reporters, Ben Hecht and Charles MacArthur. In the original play, the character of Hildy was a man, but Hawks changed the gender and added a romantic subplot that serves to effectively heighten the tension between editor and reporter. Hawks’ version retains much of the play’s whip-smart, fast-paced, overlapping dialogue (delivered at a rapid-fire pace for which the film would become infamous), as well as the biting sarcasm and satirical wit that laces practically every exchange between the characters. The end result–a hilarious, tangled mix of drama, political intrigue, social commentary, and biting comedy–is a film that revels in screwball comic insanity while making a provocative statement about the “means to the end” ethos of modern-day journalism. 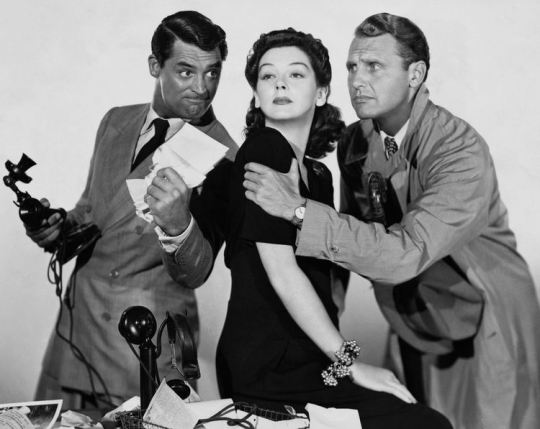 This media ruthlessness, if you will, is something that Hildy has come to recognize before the events of the film, and though she ultimately finds herself sucked back into the journalism pool (and, concurrently, into Walter’s orbit), she initially views her reporting self with an air of self-contempt. “I’m getting married,” she proclaims, “and I’m also getting as far away from the newspaper business as I can get.” Her resolution doesn’t wane even in the face of Walter’s irritated cajoling: “I know you, Hildy. I know what quitting would mean to you … It would kill you! … You’re a newspaperman!” But his insistence only causes her to laugh as she shoots back, “That’s why I’m quitting. I want to go someplace where I can be a woman.”

It’s true that, throughout the course of the film, Hildy is generally treated like one of the guys, even by Walter, the ex-husband with whom she still shares an obvious and heated connection (the lively chemistry between Grant and Russell makes it all the more disappointing that they never shared the screen again). And while Hildy has obviously grown quite weary of this perceived lack of recognition of her femininity, there’s also something intriguing about it as well. Hildy is one of the more solidly independent female characters to emerge from the classic Hollywood period, depicted as almost unfailingly equal to any of her male colleagues; in fact, those colleagues, upon reading her half-finished piece on Williams while she’s away from her typewriter, laud her interviewing skills (though not while she’s actually in the room). She’s Walter’s star reporter, as he proclaims multiple times throughout the film, and he’s not above conducting an unending series of dirty misdeeds to keep her on the job–whether it’s getting Bruce arrested for passing off counterfeit money and “mashing,” or having his lackeys kidnap Bruce’s meddling mother to keep her out of the way. True, much of that comes from his romantic goals, but Walter–for all of his assholish tendencies–also celebrates Hildy’s talent in a way that Bruce, who states that all he wants is to give Hildy the “respectability” she claims to crave, does not. 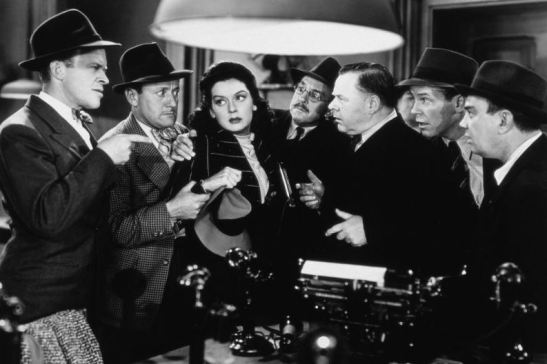 Hildy has a jaded view of what being a reporter entails; when Walter states that she can’t leave–“You’re a journalist!”, he exclaims righteously–her reply is cutting and swift. “A journalist? What does that mean?” she snaps. “Peeking through keyholes, chasing after fire engines, waking people up in the middle of the night to ask them if Hitler’s going to start another war, stealing pictures off old ladies? I know all about reporters, Walter.” Still, so ingrained in her is the need to “get the story” that, against her better judgment, Hildy is drawn into reporting about Williams’ upcoming execution–purportedly for the purpose of making money, but in actuality, it’s obvious that she’s utterly fascinated by the case.

Hildy’s frustration with the profession crystallizes later in the film, as she watches the male reporters in the press room bait Williams’ friend, Molly, with cruel comments and innuendo about her relationship with the condemned man. While Hildy escorts a weeping Molly from the room, the camera lingers on the male reporters as their hard-edged journalistic veneer melts away, briefly revealing the humanity beneath. Like Hildy, they are entirely self-aware of what they have done in the name of “story”–the lies, the exaggeration, the determined swagger–and the morose atmosphere that hangs over the room is thick with shame and regret. And when Hildy returns, she stares them down–perhaps seeing in them a reflection of what she is trying to escape–before murmuring sardonically, “Gentlemen of the press.” 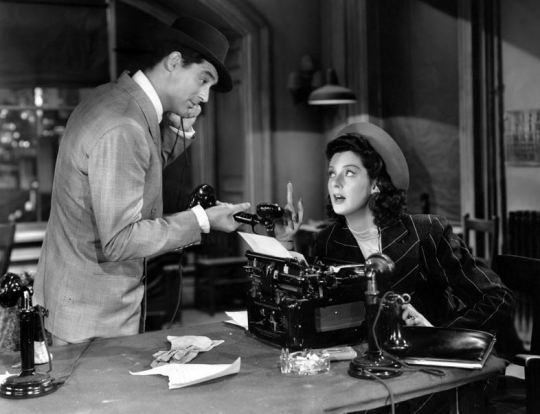 The mood of self-reflection, however, is soon shattered in the excited wake of Williams’ escape, and the pace of the film ramps up threefold as Hildy finally abandons any notion of leaving without the full story. The reporter’s instinct is inescapable, and Hildy fully gives herself over to it, even chasing down a cop, tackling him in the street, and bribing him in order to wrangle information out of him.

The antic climax drives home the film’s mocking attitude toward the reporters’ collective “anything for the story” mindset. Williams is discovered hiding in the rolltop desk in the press room, and while the sheriff and his deputies pull their guns and threaten to shoot the man through the desk (with Hildy protesting that it would be “murder”), the male reporters jump on the telephone and narrate the action to their respective editors. And as the weary prisoner gives himself up without a fight and walks out of the room under his own power, every single one of the journalists has a different version of the events taking place, each more salacious and thrilling than the next:

“Earl Williams just captured in the criminal courts building.”
“Williams was unconscious.”
“The police overpowered him.”
“His gun didn’t work.”

The film quickly cuts between the rather benign action onscreen and the breathless, excited phone reports from the journalists, painting a frank portrait of their fabrications in the name of “story”–one that all the while casts a subtly contemptuous eye on the profession as a whole.

Still, as self-aware as she is of its flaws (and how they manifest themselves in her and her colleagues), ultimately, Hildy cannot escape the pull of the job. She’s a journalist, a self-proclaimed professional “buttinski.” And the so-called “respectability” offered by poor Bruce simply hasn’t a chance in the face of a hot scoop, a front-page byline … and, of course, Walter’s ever-so-charming dimple.

This post is our contribution to the Breaking News: Journalism in Classic Film blogathon, hosted by Comet Over Hollywood and Lindsay’s Movie Musings. Head on over to check out all the other members of the classic film “press box” who are participating in the event all weekend.

13 thoughts on ““Very little respect for the press around here”: Journalism in His Girl Friday (1940)”