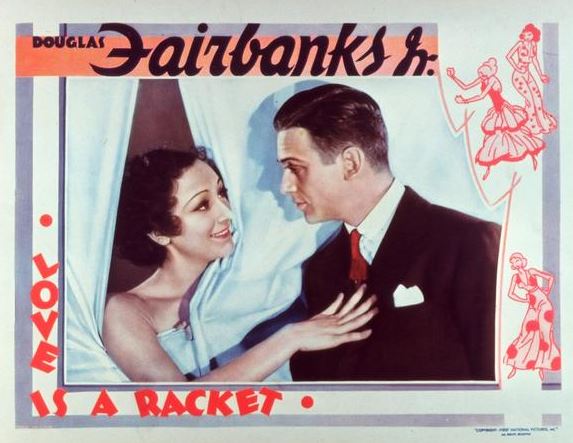 New York City gossip columnist Jimmy Russell (Douglas Fairbanks, Jr.) knows all the right people, and all the wrong ones, too. Being on the Broadway beat means he spends quite a bit of time at Sardi’s, especially with his lady of the moment, aspiring actress Mary Wodehouse (Frances Dee)–much to the displeasure of his friend, Sally (Ann Dvorak), who is secretly in love with him. Jimmy frequently mentions Mary in his column to boost her image, and while Mary professes her reciprocal affection for Jimmy, she does not miss any opportunity to schmooze with noted Broadway producer Max Boncour (Andre Luguet).

When one of Jimmy’s acquaintances, gangster Eddie Shaw (Lyle Talbot), comes over to their table at dinner one night, he takes a shine to Mary, much to Jimmy’s irritation. Soon after, Mary admits to Jimmy that she is in trouble: she’s written three thousand dollars’ worth of bad checks and is completely broke. Jimmy resolves to help her in whatever way he can, but when he goes around to the businesses and inquiries about Mary’s debts, he is informed that someone else has paid for her charges and taken the bad checks.

Jimmy and Mary soon discover that Shaw is the mystery man, when he demands that Mary come to him (i.e. trade her body for her debts) in exchange for paying off her bills and not informing the police about the rubber checks. With the help of his friend, fellow reporter Stanley Fiske (Lee Tracy), Jimmy tries to save Mary from the entire mess, getting into quite a bit of trouble of his own. But Mary’s problems are far from over when murder is suddenly thrown into the mix.

Directed by William Wellman, Love is a Racket (1932) is a snappily-paced melodramatic potboiler with touches of light comedy and a healthy dose of sex. In other words, this one’s a pre-Coder, through and through, and a surprisingly entertaining one at that. There’s a genial lightheartedness about the film, despite an oftentimes oppressive vein of misogyny that runs throughout–because when it comes right down to it, most of the difficulties in Jimmy Russell’s life can be traced to his attachment to those marriage-minded, sexy, damnable (and possibly diseased) dames of the world. 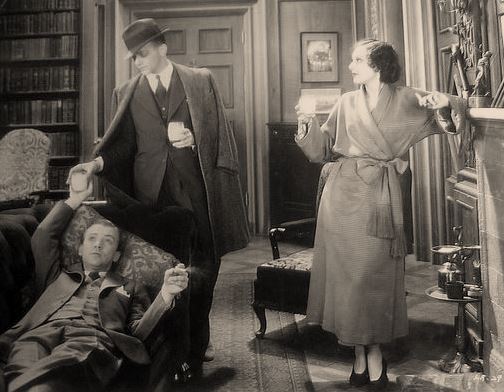 Fairbanks is a handsome, solid (if otherwise unremarkable) leading man here, imbibing Jimmy with a kind of civilized coarseness that generally works for the character. He may be in love with Mary, and at times temporarily blinded to her faults, but at heart, he is quite the cad, as evidenced by his treatment of the other women around him: covering their faces with his hand, pretending to choke them at times. His physicality with these women is oftentimes brutish in nature, belying the easiness of his joking patter with them. In everything that he does within the film, there’s a strong indication of misogyny in Fairbanks’ portrayal of the character. Nowhere perhaps is this more evident than in Jimmy’s final monologue/rant in the film. This, folks, is a thing of beauty. And by “beauty,” I mean all the bitterness and references to venereal disease that you can shove into one rapid-fire spiel, delivered with a sneer and a cloying air of condescension:

“Love’s just a mental disorder. Sure it is! Love’s spending all your dough for $15 stockings and $20 an ounce perfume. It’s lying awake nights, worrying whether she’s kidding you or not. It’s eating your heart out every time she has a cold sore on her lovely little lip. It’s laughing at the oldest jokes in the world and dancing until your arches cave in. Remembering birthdays, and spending hours debating whether she’d rather have gardenias or lily of the valley. It’s waiting for two hours for dinner when you’re hungry as a toothless timber wolf. Ah, love’s give, give, give! Your time and your money and your patience! And when you’ve shot the works, what do you got? Love. Magnolia. Love’s just a racket.” [He said the name of the film in the film! Everybody take a drink!]

That Jimmy is quite the catch, isn’t he?

(And I still can’t quite get over the “cold sore” comment.)

Love is a Racket employs the stereotypical good girl-bad girl motif to decent effect, though after watching the film, I can’t help but wonder how much more effective it could have been had the two lead actresses switched roles. Dvorak, who functions as Jimmy’s sort of love-struck “Girl Friday” (albeit with very little to actually do), is stuck in a rather pallid role that gives her little opportunity to shine. Dee, on the other hand, when given the showier part, doesn’t do enough to truly draw attention, nor does she manage to fully convey the depth of Mary’s self-preserving calculation. I find myself imagining what new depths the fiery and (sorry, Dee fans) far more capable Dvorak could have brought to the role of Mary. 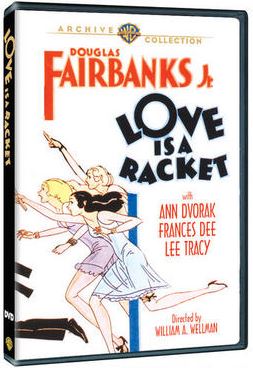 Warner Archive recently released Love is a Racket as a manufactured-on-demand (MOD) DVD, and this is one of the company’s more bare-bones editions; the DVD menu even lacks a proper title card, instead just showing a photograph of the iconic Warner Bros. water tower. As with many other titles released by the Archive, this one lacks special features, save the original trailer for the film. Speaking of which, the trailer for this movie spends so much time focusing on Jimmy’s “female troubles” with the “unfair sex” that there’s barely a hint of the murderous shenanigans that result from the characters’ interactions, which paints the film more as a jolly romantic comedy than the melodrama it truly is.

Though Love is a Racket may not be one of the best-known films from the pre-Code era, this brisk little yarn is an entertaining entry in the early-30s canon … especially if you like your caveman attitudes displayed in as attractive a package as Douglas Fairbanks, Jr.

True Classics thanks Warner Archive for providing a copy of Love is a Racket for the purposes of this review.