Although he was the star of multiple hit films, James Cagney was known as “the thorn in Jack Warner’s side.” He repeatedly went on strikes, demanding higher and higher salaries. In John McCabe’s biography of Cagney, he explains that during the filming of Winner Take All, singer Dick Powell was making $4,000/week, whereas the much more popular Cagney was only making $1,250/week. He was also forced by the studio to make many public appearances, an act which he reportedly found to be quite dull. The actor–never one to shy away from saying exactly what he thought–made his displeasure known, and persisted in seeking more compensation and, by extension, more respect from his studio.

Cagney brought that persistence onscreen with him in the characterization of foolish, womanizing boxer Jimmy Kane in the 1932 film Winner Take All. In this film–the first of several in which Cagney would play a boxer–Jimmy goes to any means necessary to please the woman that he desires, with nearly disastrous results.

At the peak of his success, Jimmy Kane is sent away to a health spa/rehab in New Mexico in order to get him away from his partying lifestyle. On his first night there, however, he meets sweet widow Peggy (Marian Nixon) who is at the retreat for the sake of her son, Dickie (Dickie Moore). Jimmy’s manager, Pop (Guy Kibbee), is aghast that the boxer has managed to strike a love affair during his rehab: “Women! I send him 3,000 miles to get him away from ’em, and in the middle of the desert, he finds another one!”

Things are looking happy for the couple until Jimmy returns to New York. Upon meeting the beautiful socialite Joan (Virginia Bruce), Jimmy falls quickly and risks his career to please her. Like a lovesick abused puppy, Jimmy changes everything about himself that Joan doesn’t like, all the while ignoring loyal Peggy. When he discovers that Joan does not love him and is attempting to run away with another man, however, Jimmy returns to seek Peggy’s hand in marriage.

While the plot of this film is somewhat sickening, James Cagney’s portrayal of a dumb, uncultured boxer makes the film interesting. Jimmy comes from a different socioeconomic background than his “love” Joan, but that doesn’t stop him from seeking to please her. Unfortunately for Jimmy, his efforts are made in vain, as Joan is simply bored, and is excited by spending time with someone as unique to her as Jimmy. Her friends chastise her for toying with him, and mock Jimmy whenever they feel the whim: “Oh, Mr. Kane, tell me, what do you think of Russia’s five-year plan?” Jimmy, clearly unaware of the political happenings of the world, replies, “Oh, I think anybody’s a sucker to tie up with those installment thieves. I pay cash for everything.” When someone laughs at his response, Jimmy replies by punching the man in the face.

In order to please his lady, Jimmy hires an etiquette coach and purchases clothing that he feels would be more suitable for Joan’s company. When the etiquette coach asks him if he’d like to practice reading Shakespeare, Jimmy’s true roots shine through when he replies, “I don’t want any part of that Shakespeare guy. He ruined Gene Tunney.” Poor, foolish Jimmy even goes to the extreme of having plastic surgery to repair his nose that was broken during a fight when Joan cruelly tells him, “I think you’re fascinating. You know, you might even be handsome if it weren’t for that and that” (referring to his nose and ear). This turns out to be a bad idea, as the flaky Joan complains that those flaws were all that made him interesting. Jimmy’s blindingly persistent advances repel Joan, as his intense admiration would likely repel most any woman. He tells her (not asks her) that they will be married, buys her an expensive ring, and demands that she attend all future fights and stay supportive throughout. Indeed, Jimmy risks his career and reputation for his uninterested lady, as he tries quite hard in each fight to keep his new nose from being hit. This causes his fights to become boring for the audience and especially Joan, as Jimmy “dances” around the ring instead of putting up a heated match. What Jimmy lacks in intelligence and common sense, he makes up for in his heated temper and passion for what he wants. 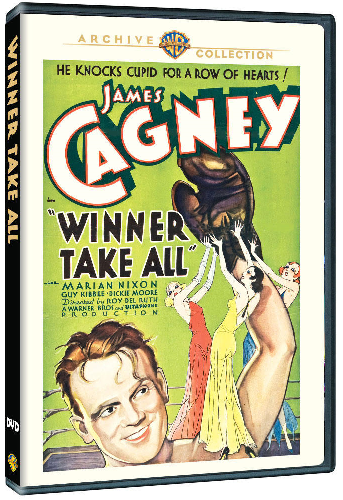 Winner Take All is now available on MOD (manufactured-on-demand) DVD through Warner Archive. Their version boasts a great print of this little-known movie, though extras are scarce.

Watching this film has made me much more interested in learning about Cagney. Despite the depressing storyline of people using each other for various reasons, the film is worth the watch simply to watch Cagney shine in his portrayal of this egotistical, ridiculous man.

True Classics thanks Warner Archive for providing a copy of Winner Take All for the purposes of this review.