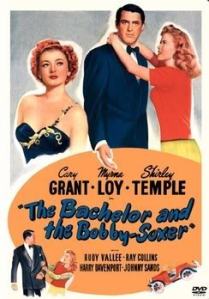 Some of the first classic films I ever saw were the old Shirley Temple flicks from the 1930s, when the curly-headed moppet conquered Hollywood and the hearts of millions to become one of the first true cinematic superstars. I loved the innocent, precocious youngsters Temple excelled at portraying. I loved the song-and-dance numbers. I wanted to be a Broadway baby. It didn’t matter that I couldn’t sing a note, or that the extent of my dancing experience was performing the robot at the sixth-grade dance. Shirley could sing, and she could dance, and I adored her cute and frothy films.

I still hold a particular fondness for some of those films, though it’s difficult to watch and enjoy them now, when the passage of time–and the toils of growing up–have really revealed the cloying sentimentality that drives them. And it’s somewhat sad to reflect that the same curly-headed moppet who so captured the spirit of an economically-Depressed America could not translate the success of her younger years into a viable adult acting career.

The Bachelor and the Bobby-Soxer is one of the handful of “grown-up” films which Temple made in the 1940s before her self-imposed retirement from the big screen, and along with 1944’s Since You Went Away, the best of them. Temple stars as a teenage girl, Susan, being raised by her older sister Margaret, a judge (Myrna Loy). When artist Richard Nugent (Cary Grant) visits Susan’s high school to deliver a lecture, the young girl develops a crush on him, and Margaret (who had previously dealt with Richard in her court for fighting in a nightclub) forces Richard to date the girl, hoping Susan will grow disillusioned with the older man. But it’s Margaret who, against her better judgment, finds herself falling for the charming bachelor.

The film is based on a screenplay by first-time Hollywood screenwriter Sidney Sheldon, who would later win the Academy Award for Best Screenplay for this script, surprising many critics who saw this film as nothing more than enjoyable fluff. Sheldon would later go on to create, produce, and write for the television hits The Patty Duke Show and I Dream of Jeannie, but it was a string of pulpy, salacious, wildly plotted novels that would bring Sheldon the most notoriety in his later years. The sly, winking hints of salaciousness Bobby-Soxer are nothing compared to Sheldon’s novels, where in any given story one might find rape, torture, incest, adultery, and murder … and that’s only in the first half of the book (yes, I’ve read several, and they are mindless fun–and as with many authors, the earliest titles are the best. I use the term “best” loosely).

The cast does a wonderful job of keeping the zaniness believable and watchable. The chemistry between Loy and Grant is particularly winning, and would later lead to their pairing in the following year’s Mr. Blandings Builds His Dream House. Temple more than holds her own with her older counterparts, and the supporting cast is rounded out by singer Rudy Vallee as District Attorney (and Margaret’s beau) Tommy Chamberlain, Harry Davenport (Gone With the Wind’s Dr. Meade) as the girls’ great-uncle, and Ray Collins (one of Orson Welles’ Mercury Theater troops) as Dr. Matt Beemish, the psychiatrist who initially suggests the Richard-and-Susan “relationship” experiment. But the film hinges on Grant’s performance as the sophisticated, yet ultimately hapless, bachelor, and he carries the film with aplomb.

Grant’s beginning to look older here, more distinguished and less boyishly handsome than his previous films. And it’s easy to see why Susan’s affections gravitate towards him. C’mon: it’s Cary-effing-Grant. Even at the ripe old age (ha!) of 43, he’s lost none of the robust physicality that marks some of his greatest screwball performances (Holiday, Bringing Up Baby, Arsenic and Old Lace). Check out the scenes in which Richard enters the novelty races at the urging of Susan (and the competitive ire of Chamberlain):

Side note: my fellow born-and-bred 80s kids will recognize the “Hoodoo” shtick from Bobby-Soxer:

In the 1986 film Labyrinth, David Bowie borrows this refrain for one of the songs on the movie’s soundtrack.

Catch this one if you can; it’s worth more than a few laughs! And if you miss it, there’s always DVD. It’s also airing again on March 9th at 4PM EST.