In celebration of Women’s History Month, True Classics is taking a look at some of the women who helped shape the movie industry through their contributions behind the camera. Last week, we examined the roles of some of the women directors who made their mark both in the silent era and after the advent of sound. Today we’re going to revisit some of the female screenwriters whose work lit up the silver screen in those early years.

One of my favorite books as a child was Louisa May Alcott’s Little Women, and my favorite character, without question, was Jo March. Jo spent her days in the attic, “scribbling” out stories and poems and plotting how best to get them into print. Jo was a not-so-subtle representation of the author who created her, an author whose position as a female writer sometimes made it difficult to be taken seriously in the literary field. It’s been well documented that women writers in the nineteenth century sometimes had to result to using male pseudonyms in order to see their work actually make it to print–the Bronte sisters, for example, initially published their respective works under the names Acton (Anne), Currer (Charlotte), and Ellis (Emily) Bell, and Alcott herself published several of her more “adult” pieces under the name A.M. Barnard.

By the twentieth century, women writers found it much easier to publish their work under their own names. Still, the road to fame and fortune (or mere solvency) was not an easy one. The “woman’s novel” label severely limited the general readership of a particular piece, and it was difficult for many women to break out into general popularity among readers.

In the early days of Hollywood, however, a writer’s gender generally had little influence over whether or not a motion picture would ultimately be successful. Seems strange to think about now, doesn’t it? But in the silent era of moviemaking, women were able to get an unprecedented toehold in the industry. In fact, percentage-wise, more women worked as screenwriters in the silent era than are currently doing so in modern-day Hollywood–by some estimates, more than HALF of the films produced in the first two decades of Hollywood filmmaking were written by women!

The most prolific screenwriter, male or female, to come out of those early years is Frances Marion. And yet, if you were to ask a majority of casual movie fans if they had ever heard of her, the answer would be an overwhelming “no.” Marion wrote over two hundred screenplays during those days, and her work helped guide and shape the careers of some of the greatest silent-era actors and actresses to ever grace the screen. 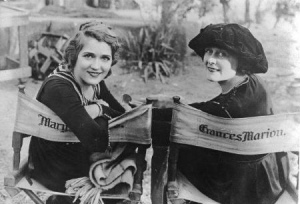 Marion began her tenure in Hollywood in 1912 working as an assistant for director Lois Weber. It wasn’t long before Marion started writing her own scripts, and in 1917, she formed a partnership–and a close personal friendship–with America’s sweetheart, Mary Pickford. Pickford hired Marion to be her own personal screenwriter, and Marion wrote the scripts for some of Pickford’s most enduring films: The Little Princess, Rebecca of Sunnybrook Farm, The Poor Little Rich Girl (all in 1917), Pollyanna (1920), The Love Light (1921, which Marion also directed), and Secrets (1933–Pickford’s last film role).

Pickford was not the only silent film actress to benefit from Marion’s pen–she wrote or reworked scripts for Marion Davies, Lillian Gish, and Marie Dressler, among many others. For Davies, Marion fought with the young actress’ controlling lover/Svengali, William Randolph Hearst, insisting that Davies was best suited to light comedic roles on screen (exemplified by her work in the Marion-penned 1932 comedy Blondie of the Follies). In regards to Gish, Marion rewrote the screenplay for the 1926 adaptation of Nathaniel Hawthorne’s paean to the ills of adultery, The Scarlet Letter–a book whose salacious material was considered nigh on impossible to adapt for the screen, despite the less restrictive pre-Code atmosphere of the 1920s.

And as for Dressler, Marion plucked the aging actress out of near-obscurity and made her a bona fide star. In 1930, when Marion was working on the screen version of another controversial work–Eugene O’Neill’s Anna Christie (which was, incidentally, Greta Garbo’s first talkie)–she not only used her influence to score Dressler the supporting role of Marthy, but also developed the screenplay for Min and Bill, the movie which would eventually present Dressler with the Academy Award for Best Actress. Marion also went on to write the treatment for Dinner at Eight (1933), in which Dressler was given top billing. 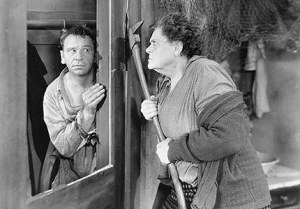 Dressler and Beery as Min and Bill

Dressler’s frequent co-star, Wallace Beery, also benefitted greatly from his association with Frances Marion. Beery, who like Dressler had almost given up on Hollywood by 1930, made a mark through his pairings with Dressler in Min and Dinner, as well as the later film Tugboat Annie (1933–not written by Marion). But Beery finally gained immense, lasting popularity in the two films that also, signficantly enough, awarded Marion her two Oscars for screenwriting: 1930’s The Big House (which, according to many film critics, actually invented the “prison drama” genre of films) and, the following year, The Champ (in which Beery co-starred with popular child actor Jackie Cooper). Beery was nominated for the Academy Award for Best Actor for both movies, and won the award for The Champ (in a tie with Fredric March).

Marion’s remarkable output of screenwriting work slowed to a trickle by the mid-1930. By that time, she had been the highest-paid screenwriter in Hollywood for fifteen years, and she had raised the ire of studio executives for her participation in the formation of the Screen Writers Guild in 1933 (she also served as the first vice president of the group). The 1936 death of her biggest supporter, MGM’s boy wonder producer Irving Thalberg, however, marked the beginning of the end of Marion’s career in Hollywood. She remained under contract to the studio for the next decade, but eventually left Hollywood in 1946. Her last film for which she was credited was the 1940 jungle adventure Green Hell. Marion passed away in 1973 at the age of 84, soon after publishing her memoirs.

One of Marion’s contemporaries and good friends, Anita Loos, also wrote many scripts for MGM, and even collaborated with Marion on several projects including the screenplay for Blondie of the Follies, for which Loos is credited for contributing additional dialogue. 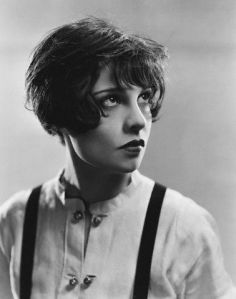 Like Marion, Loos made her initial splash in Hollywood in 1912, when her short subject script for The New York Hat was produced by D.W. Griffith, starring Pickford and Lionel Barrymore. She wrote almost exclusively for Griffith until 1916, when she joined forces with future husband John Emerson to write screenplays for silent star Douglas Fairbanks. The collaboration with Fairbanks made Loos just as big a star as some of the actresses for which she was writing.

Emerson was, by most accounts, a source of heartbreak and anxiety for Loos. For many years, they were credited as a screenwriting duo–except, in many cases, Loos was the one doing all of the work. Emerson became a hypochondriac in his later years, using his various illnesses and ailments in an attempt to guilt Loos into abandoning her career, as her success made Emerson insanely jealous, to the point where he actively tried to suppress some of her work.

In the midst of her personal turmoil, Loos’ arguably most popular creation emerged: the character of Lorelei Lee, the diamond-desiring gold-digger-to-beat-all-gold-diggers and unlikely heroine of her 1925 novel Gentlemen Prefer Blondes. Based upon the hijinks of her social circle in New York, Loos’ insightful commentary on the modern American woman who regularly parlayed her beauty into an ever-increasing jewelry collection struck a chord with readers, and it became one of the best-selling novels of the decade. Loos adapted the book for the Broadway stage in 1926 and for the screen in 1928. It was then adapted as a musical, first on Broadway in 1949, and then in its most famous incarnation, the Marilyn Monroe-Jane Russell film version in 1953. 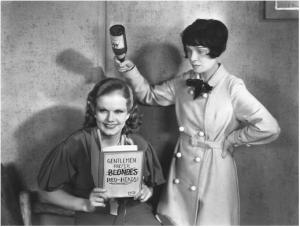 Loos had an ear for the catchy, sometimes nonsensical slang of the 1920s and 30s, which was reflected in some of her more memorable screen treatments, including her screenplay for the 1939 film adaptation of Claire Booth Luce’s caustic treatise on upper-class femininity, The Women, as well as the five films she wrote for star Jean Harlow: Red-Headed Woman (1932); Hold Your Man (1933); The Girl for Missouri (1934); Riffraff (1936); and Harlow’s final film, 1937’s Saratoga. Loos contributed quite a bit to the Harlow mythos, as Harlow’s roles in these films helped craft the sexy, no-nonsense screen persona that is so familiar to modern film audiences.

Loos continued to work on several films throughout the 1940s and early 1950s, but eventually left Hollywood for New York. She spent her remaining years as a contributor to several magazines, including Vanity Fair and Harper’s Bazaar, and was a well-known social butterfly in the city until her death in 1981 at the age of 93.

Like Marion and Loos, who were so instrumental to the careers of Pickford, Dressler, and Harlow, June Mathis was well-known for her championing of a silent-screen star. In her case, it was heartthrob Rudolph Valentino, for whom she was credited by many–including the star himself–for discovering. 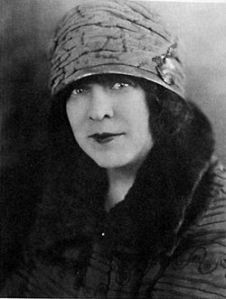 Mathis began writing scripts in 1915 and soon found success at MGM. Within three years, she became the head of the studio’s writing department–the first woman to be named a film executive in Hollywood. During her tenure with MGM, Mathis wrote screenplays for several stars, including Ethel and Lionel Barrymore and legendary comedian Buster Keaton, for whom Mathis co-wrote the script for his first full-length feature, 1920’s The Saphead.

But it was her partnership with Valentino for which Mathis is now most remembered. In 1921, Mathis wrote the screenplay for The Four Horsemen of the Apocalypse, and when asked for her input on who should star, the writer suggested Valentino. Up until then, the actor had been relegated to small roles in B-grade pictures. That was soon to change–Valentino’s smoldering good looks, coupled with the sensuous tango scene and the melodramatic appeal of the film’s anti-war plot, made it an instant success at the box office, and only served to solidify Mathis’ influence in Hollywood. 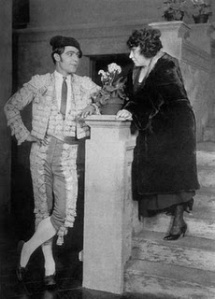 Mathis wrote several more films for Valentino, including 1921’s Camille and The Conquering Power, 1922’s The Young Rajah and Blood and Sand, and the initial script for 1924’s The Hooded Falcon. Although Mathis and Valentino enjoyed a close relationship for several years–some scholars claim that their relationship was more mother-child than friendly–tension grew between them in the wake of Valentino’s elopement with Natacha Rambova (a marriage that began with Valentino’s arrest for bigamy, as his divorce from his first wife was not yet finalized at the time). When Valentino rejected the script for Falcon, Mathis ended their professional–and personal–relationship, and the pair did not speak for two years.

Not long after their reconciliation in 1926, Valentino died suddenly at the age of 31, shocking the country. When it was revealed that Valentino had left behind no burial arrangements, Mathis offered her own crypt in the Hollywood cemetery. It was intended to be a temporary solution. However, less than a year later, Mathis herself sadly passed away at the age of 38, and she was laid to rest beside Valentino. They remain resting side by side to this day.

These women–along with contemporaries like Jeanie MacPherson, Lenore Coffee, Gene Gauntier, Adela Rogers St. Johns, and untold others–wrote the screenplays for some of the most entertaining, memorable films that early Hollywood has to offer. Yet their names have been largely forgotten as the years have passed. It’s important to remember their contributions, however, for their witty, wise, and wonderful words not only helped create the foundation for the Hollywood we know and love today, but also influenced the work of numerous writers and filmmakers–male and female–in the decades that followed.

4 thoughts on “Celebrating Women in Classic Film: The Scribblers”