I had to take Robin Hood (1973) on our Disney list. I grew up with an older brother (more or less) who absolutely loves this one. He spends a lot of times whistling “Oo-De-Lally.”  My sister rewatched this with me, per a tradition of ours: watching animated films when we’re together (some have a lot of merit, and others … not so much).

She told me how she thought that this was the reason for the Hamster Dance (it isn’t) for a while.  Robin Hood‘s music is iconic Disney, some repeated, and some just flat out important. One word: Roger Miller. Here, he plays Alan-a-dale, the Rooster. The world still couldn’t keep going musically without him. And a special note: he wrote the “Hamster Dance” song.

Robin Hood is another showcase of Disney talent: Phil Harris (Little John), Pat Bertram (The Sheriff), and George Lindsey (Trigger … and Goober Pyle). You’ll also probably recognize the voice of Candy Candido (the captain of the guard, and any gravelly voice in animation… I recommend IMDb on this. It’s just worth a look).

It’s a showcase of other famous talent, too: Andy Devine (Friar Tuck), Carole Shelley (Lady Cluck–we also see her later, playing the Fates in the Disney-fied Hercules, TV series, and video game),  Peter Ustinov (Prince John and King Richard, but you may also recognize him from his Hercule Poirot roles),  Terry-Thomas (huge character actor, but  my favourite in his canon is definitely It’s a Mad, Mad, Mad, Mad World), and Ken Curtis (don’t make a Western without him). 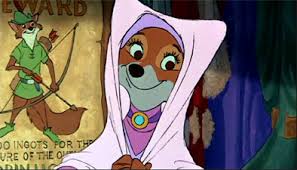 This is every Disney iconic moment, from the actors to the way the characters dance. During the party in Sherwood Forest, keep an eye on the band: you may notice how similar they are to Fat Cat’s band in Robin Hood‘s predecessor, The Aristocats. 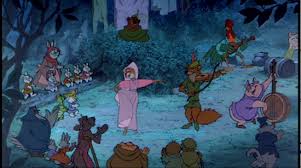 It’s a pinnacle classic. I love Prince John’s “mommy issues” where he loses his grip every time she’s mentioned, and his laugh of “aha, aha.” 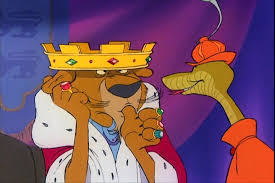 However, my favourite characters are tied between Sir Hiss and Lady Cluck. Sir Hiss is the rather abused and ignored brains of the opposing team, which is somehow pitiable, even if he’s technically a villain.