With the publication of his 1994 biography of Barbara Stanwyck, Axel Madsen infuriated a legion of the actress’ fans by claiming that Stanwyck had been bisexual, as evidenced–he says–by a lifelong friendship with her publicist, Helen Ferguson. Indeed, Madsen provides little evidence for his speculation; he admits that there is no proof of Stanwyck’s supposed bisexuality, and equates her with Greta Garbo as “Hollywood’s most famous closeted lesbian,” something that “everybody” in town allegedly knew.

Madsen seems to base much of his claim on Stanwyck’s onscreen persona rather than anecdotal evidence from the actress’ personal life, writing: “To lesbians growing up in loneliness, lacking contacts with other lesbians, fearing parental shock and despairing of finding examples to emulate, the Barbara Stanwyck screen image defined her as ‘one of us.’ The reason was not any coded message in gestures or delivery, but the way the screen characters to which she gave life defined themselves in their own terms and were comparatively independent of men and of household expectations.”

Whether or not Stanwyck was gay (and really, who could even say for sure at this point?), the fact that she was so willing to take on potentially controversial, “tough-girl” roles throughout her career indicates that, at the very least, she had no fear of being accused as such. According to Madsen, when gossip columnist Louella Parsons questioned Stanwyck’s choice to play a lesbian brothel owner in 1962’s Code-pushing Walk on the Wild Side, the actress reportedly snapped, “What do you want them to do, get a real madam and a real lesbian?” [Still, as Dan Callahan points out in his recent biography of the star, Barbara Stanwyck: The Miracle Woman, Stanwyck’s character in that film is little more than a “shallow conception, a woman who needs to be ‘explained’ by some Penguin Freud, a lesbian who doesn’t even get to be a real lesbian because that would be too threatening” even in the more permissive cinematic atmosphere of 1962.]

From her earliest days in Hollywood, she was unafraid to play characters that exist outside the realm of so-called “normalcy”—from prostitutes to gun molls to prisoners and every kind of dirty dealer in between, there was never a bad girl so deliciously bad as Barbara Stanwyck. Nowhere, perhaps, is this more evident than in the 1933 film Ladies They Talk About, in which Stanwyck plays an unrepentant criminal whose crimes land her behind bars. Based on the play Women in Prison by Dorothy Mackaye (an actress who had herself been incarcerated for a short period of time after her husband’s death at the hands of her lover), Ladies is, as Callahan states, “a crackerjack women’s prison movie that has all the punchy, vital virtues of a Warner Bros. film of this era.” The film certainly shares many themes with the popular, sometimes gritty fare offered up by that studio, which by the 1930s had turned from pioneering sound pictures with a series of low-budgeted musicals (many of them in early two-strip Technicolor) to offering up “social statement” and gangster films like Little Caesar and The Public Enemy (both 1931) and I Am a Fugitive from a Chain Gang (1932). Much like its male-led predecessors, Ladies does not shy away from depicting violence and mayhem; it celebrates vice even while showing the potential consequences for indulging in it, and courts controversy for its frank and sometimes sympathetic depiction of criminality.

Stanwyck plays Nan Taylor, who is arrested for helping her “gang” rob a bank by acting as the decoy to distract the guard. The embattled District Attorney, Walter Simpson (Robert McWade), knows Nan’s claims of innocence are a bunch of baloney, as she’s been in trouble with the law before. Nonetheless, she is paroled under public pressure led by Nan’s childhood friend, a radio host/preacher named David Slade (Preston S. Foster) who has long criticized the local politicians for perpetuating the city’s out-of-control crime wave through their own corruption. Slade believes that every man (and woman) should have the chance for redemption, and wants to believe that Nan–with whom he is deeply in love–is not guilty. He tells her that “bygones should be bygones” as they start a new life together, but when Nan confesses to him that she really is guilty, David turns her back over to the authorities.

Nan is convicted and sentenced to the San Quentin penitentiary for two to five years. As “fresh fish” at the prison, Nan immediately comes into conflict with “Sister Susie” (Dorothy Burgess), a fellow prisoner who reveres David Slade and resents Nan for turning off his radio show in the common room. Nan wins the respect of the other women when she verbally cuts Susie down to size, and Linda (Lillian Roth) takes Nan under her wing and advises her about her new domicile, introducing her to other prisoners like overly jolly former madam “Aunt” Maggie (Maude Eburne).

In the meantime, David continues to write and tries to visit Nan in prison, though she refuses to have anything to do with him, tearing up his letters and not leaving her cell on visiting days–much to nosy Susie’s anger. But when her old pal Lefty (Harold Huber) comes to visit and tells her that fellow gang members Don (Lyle Talbot) and Dutch (Harold Healy) have been captured and sentenced to San Quentin themselves (albeit for twenty to life in their cases), Nan agrees to help her boys with their escape plan, even if it means seeing David again in order to make the plan work.

Her timing is put in jeopardy when Susie manages to get Nan into trouble, causing her to lose her privileges for thirty days. But the matrons, sympathetic to David’s obvious love for Nan and his desperation to see her, give her special permission to meet with him anyway. She manages to slip a letter to Lefty–with an impression of the matron’s key–into David’s pocket as he embraces her, and when David later finds it, he drops it into a mailbox. But in quick order, the police intercept the letter, Don and Dutch are killed in their escape attempt, and Nan is denied parole when her involvement comes to light. Certain that David had turned her in once again, she plots her revenge–but it doesn’t turn out exactly as she planned. 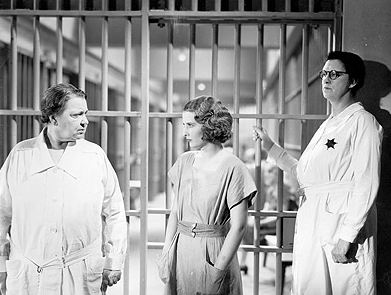 As indicated previously, most of the Warner Bros. pictures in the “gangster” milieu center around men, but Ladies They Talk About is a scintillating look at the life of crime from the other side of the coin. Still, the movie has its weaknesses, and is largely unable to reach the same level of brilliance as films like Little Caesar and Scarface. Part of that is the way the film is constructed: the framing scenes–the ones outside the penitentiary–are the weakest ones of the film, and the ending, in many ways, is simply absurd, grasping at comic straws in a jarring moment of supposed reformation (seriously, when’s the last time YOU told someone who shot you, “That’s okay”)?

The movie finds its strength in the middle section, with its non-glamorized depiction of life under incarceration. None of these women are innocent, retiring creatures–they are guilty, they know they are guilty, and many of them are unrepentant in their guilt. The prison functions as a microcosm of the world outside—the women are subjected to the oversight of the men who put them there, just like their “free” sisters outside the prison walls. When fellow prisoner Linda shows Nan the ropes of life in the joint, she tells her that the women are “always a few feet away” from what they want most–“freedom and men.”  And yet the female prisoners have managed fine on their own, creating a sort of dysfunctional family with the atmosphere of a dormitory, complete with its own caste system that intrinsically mirrors the one outside. 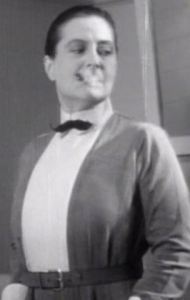 Even within the hierarchy of life inside the prison, it is the more “masculine” prisoners who rule the roost–prisoners like the overly aggressive Susie (whose jealousy, Linda warns, is dangerous to Nan), who eventually backs down under threat of Nan’s fist after Nan manages to knock her out with a single punch during an ill-picked cat fight. There’s also the haughty dowager, Mrs. Arlington (Cecil Cunningham), who lives and breathes the patriarchy that produced her, lording her breeding above the other prisoners and calling the black inmates her “servants.” And then there’s the unnamed “butch” stereotype whom Nan meets in the washroom (as Linda wryly teases: “Watch out for her; she likes to wrestle”). This character is later shown during a brief montage to be doing bicep curls in her cell, much to the amazement of the young brunette prisoner sitting on her cot (“You’re just always exercising!” she exclaims as the woman continues to flex her arms) … and, in case this prisoner’s sexuality is questionable to the viewer, she is constantly shown with quite the phallic-looking cigar hanging out of her mouth. In a world without men, this film seems to say, it is only those who essentially become men–by exerting their influence on their fellow prisoners through intimidation, force, or respect for their physical strength–who can hold any amount of power (however limited) in the institution. Even in a world without men, the “men” still find a way to run the joint.

Ladies They Talk About is one of the more notable precursors to the “women’s prison film” subgenre that really began to thrive in the 1950s. Movies such as Caged (1950), Women’s Prison (1955), and, later, Caged Heat (1974), further explore the themes of isolation and powerlessness associated with incarceration—and, more broadly, the same isolation and lack of power that comes from simply being a woman in a man’s world. And the movie is recognized today in LGBT scholarship as a notable film for its inclusion of lesbian imagery (however fleeting). Though Ladies‘ depiction of its gay character is “coded” in shades of obvious cliche, it is nonetheless impressive that directors Howard Bretherton and William Keighley managed to include these references without delving into broad caricature of the character–she is not ridiculed or feared for her obviously differing sexuality, but is shown to be admired or, at the very least, healthily respected by her fellow inmates in her relatively few moments on screen. Funny, how the world of prison is shown to be more inclusive and accepting than the world outside it, isn’t it?

This post is a contribution to the Queer Blogathon, co-hosted by Garbo Laughs and Pussy Goes Grrr. Head over to their sites to check out the other wonderful entries that have been posted throughout the week, and make sure to enter the raffle to win one of two excellent film books on the topic of queer theory in film!

15 thoughts on “The ladies they talk about.”