The second in a series of what would come to be known as the “English cycle” of animated films, Walt Disney’s adaptation of J.M. Barrie’s classic children’s tale, Peter Pan, was released in 1953 to much of the same critical furor that surrounded its predecessor, Alice in Wonderland (1951). As with the previous film, Disney’s liberty with the source material created problems for some critics, who felt as though the studio had tampered with the magic of Barrie’s original and diluted it to something less than palatable (when, in fact, it follows the source material more closely than many other Disney adaptations).

Having read the novelization of Barrie’s original play, Peter and Wendy (1911), for a children’s lit class several years ago, I can say that Disney does a decent enough job following the original–the beginning and ending are different, and the Darling parents never realize their children’s absence as they do in Barrie’s tale.  But the basic story is very much the same, and this is both a good thing and a bad thing–good for literary purists, bad because the Disney folks don’t really take the initiative here to tell a fresh, new take on the story.

This film is not among my favorite Disney adaptations, and it’s difficult to pinpoint why. Even as a child, this one rarely held my attention long. But considering it now, I think my biggest problem with the film is the way it draws such stereotypical female figures. The film’s portrayal of its female characters is … well, let’s just say it’s not all that progressive. Tiger Lily spends the entire film virtually silent (so as not to betray Peter’s location), rendering her little more than a cute little set-piece. Tink is a shrewish, jealous little sprite, prone to throwing temper tantrums and causing mischief (and potential murder). The mermaids are spiteful and harmful to anyone other than Peter, again out of jealousy. All of this begs the question–why are all these girls fighting over a green-tighted little pipsqueak? And why are the female characters either motherly (Mrs. Darling, Wendy) or utterly bitchy (the previous examples)?

The best element of the entire film is the villain–by turns effeminate, whiny, murderous, and hilarious,  Captain Hook is one of the most engaging Disney bad guys. Though he is comical, he is still dangerously determined and murderous in his pursuit of Peter and his friends. His attempts to get revenge on Peter for the loss of his hand are always foiled by the accursed ticking of the crocodile (who ticks because he swallowed an alarm clock). This sound thereafter warns Hook when his scaly nemesis is near–and send him into a blind panic that is highly amusing. The combination of humor and danger makes the character more than the mere caricature that some of the other characters appear to be–if he were slightly more slyly sarcastic, and slightly less of an annoying git, he’d practically be Maleficent’s (Sleeping Beauty) blood brother.

The film has contributed quite a bit to the Disney mythos; Tinker Bell, more so than any other character, has become ubiquitous in the general Disney consciousness, especially as of late–the little fairy is everywhere, from toys to games to clothing to even her own series of digitally-animated films. She has been the unofficial mascot of the Disney company for years, sprinkling her fairy dust and wielding her magic wand at the start of many a Disney production such as The Wonderful World of Disney (anybody else miss that show???). And Disney has taken advantage of her popularity, spinning off a line of Disney Fairies from the company’s Disney Princesses imprint, of which Tink serves as the ubiquitous Head Fairy. If Tink weren’t so damned annoying, I’d probably cheer at this development; as it is, the proliferation of Tinker Bell merchandise needs to end. I’m tired of seeing her smirking little pixie face every time I round a corner at the freaking neighborhood Wal-Mart, thankyouverymuch.

Peter Pan marks two animation milestones for the Disney canon: it was the last Disney animated feature to be distributed through RKO (Disney formed his own distributor, Buena Vista, in late 1953), and it was the final film made under the auspices of the studio’s original core group of animators (labeled the “Nine Old Men”). The Nine Old Men were a storied group, long recognized for their influence on the field of animation–in essence, these are the men who made modern animation what it is today. And though Peter Pan is the last film the nine animators made together, many of them remained on the Disney payroll long after, continuing to contribute to projects through the 1970s. The two longest-lived of the crew, Frank Thomas and Ollie Johnston, produced the veritable bible of animation, The Illusion of Life, in 1981. New generations of animators, influenced heavily by the Nine Old Men and their inimitable talent, have paid tribute to their talent over the years–Thomas and Johnston even had an animated cameo in Brad Bird’s spectacular 2004 Pixar hit, The Incredibles, as the two old men near the end of the film, a fitting tribute to a pair of stalwarts in the industry. 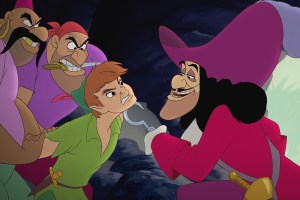 The voices in the film are led by Bobby Driscoll (of Song of the South fame) as Peter, and Kathryn Beaumont (fresh off her turn as Alice of Wonderland fame) as Wendy. Other voices include character actor Hans Conried in the dual roles of Mr. Darling and Captain Hook (fitting, as typical stage productions feature the same actor playing each of these roles in the play) and Bill Thompson (who co-starred with Beaumont as the White Rabbit in Alice) as Mr. Smee and several other nameless pirates. Also listen out for June Foray, the noted voice of Rocky Squirrel, in a couple of roles, including one of the mermaids.

While the adventures in Neverland are somewhat thrilling, the overall film is a good, but not all that exceptional, endeavor by the Disney studio. In comparison to Disney’s previous literary adaptation, Alice in Wonderland, which was infused with a uniquely oddball spirit, Peter falls a bit flat for me. Still, with its fantastic villain and a sense of childlike wonder that never seems to grow old, Peter makes for a great way to spend a lazy afternoon.

One thought on “He can fly!”